The new Chairman of the Nigerian Bar Association (NBA), Bwari Branch (Capital Bar); Clement Chukwuemeka Ugo Esq. has said that an injury to the Bench, is a wound to the Bar. Barr. Clement who emerged Chairman in the recently held election of the Branch, made this statement on Friday in Abuja during the swearing in of the elected executives for the year 2019-2021 at the Branch Secretariat.

While delivering his inaugural speech, Clement, the SERVANT ONE as he wishes to be referred to, explained; “We must as branches of NBA lend our voices against the consistent harassment and intimidation being meted out to the Judiciary, the Bench in particular by the Executive arm. The bench equally should appreciate the enormous powers and wisdom deposited in them by God almighty for the application of Justice which ought to be exercised without any intimidation, fear or favor to anybody but according to the led down rules and fear of  God that will judge mankind after our sojourn on earth.”

Continuing, Mr. Clement in reference to his projected plan of action titled United Capital Bar Manifesto towards making the Capital Bar an envy of all other branches noted that with the efforts of all members, a one year strategic Road Map to take the branch to a BETTER LEVEL, shall be unveiled after due consultation with the Excos. The said one year Road Map, according to him shall be synchronized into a Seven (7) – Point manifesto through which he was examined, scrutinized and thereafter elected.

“Feasible visibility of the branch shall be a priority to all concerned, we shall create a committee known as State of the Nation. We intend to be viable and relevant to our host community(s) in areas of their Legal rights and contribute meaningfully to issues of national discuss / importance as it affects the Bar and the Bench with full support to the NBA President’s speech delivered on the 20th June, 2019 during the NEC meeting held in Abuja”, he added.

On his own part, the presiding Judge, Hon. Justice Bello kawu, who represented the Supervisory Judge, Bwari Division; Hon. Justice O. A. Musa congratulated the new Excos and urged them to anchor their vision and programs on the provision of excellent services to members and humanity in general while acknowledging that contesting for any position in NBA ought to be purely for services and not for any monetary gain.

Tue Jul 2 , 2019
408 By Dan Ugwu It is not in doubt that propaganda, bias, prejudice, mindset, malice and the likes have often obstructed the free flow of right information. One big example of this is the trading mantra of RUGA settlement for Fulani herdsmen in Nigeria which seeks to settle migrant pastoral […] 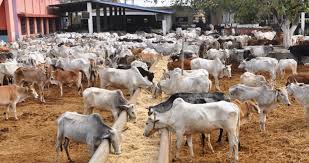