When on May 29 majority of Imo people heaved a sigh of relief, most pundits were perceptive to how the Governor Emeka Ihedioha’s led administration can smoothly and successfully deliver on his election promises (Rebuild Imo Mantra) and general yearnings of the citizens.

According to most analysts, between 2011 and 2019, Imo was turned into a cesspool of corruption and needs practical and professional actions and activities to develop new pathways to prosperity.

Nonetheless, for those who believe that Governor Emeka Ihedioha can and indeed smoothly and successfully deliver on the gains of his Rebuild Imo mantra can proudly point at the Office of the Wife of the Executive Governor as a typical example as the women have been identified as effective catalysts in the Rebuild Imo Project.

Undoubtedly, the yearnings of women for empowerment and recognition are gradually becoming a reality in Imo State. This is due to the visionary proactive and more purposeful social security-oriented Wife of the Executive Governor of Imo State; Lady Ebere Ihedioha who has decided to make women effective partners in the Imo Rebuild Project.

Since the past few months, Lady Ebere Ihedioha has continued to steer the course of the women, which includes fashioning out new vistas of empowerment, integration, collaboration and standing up for the indigent.

Lady Ebere’s recent capacity development tour on the 27 Local Government Areas of the state is a testament of her desire to seek participatory and complementary attitude towards exploring new areas of cooperation and partnership with the Imo women based on the specific objective of making Imo women more relevant in the Rebuild Imo project.

The 3 weeks long capacity development tour was part of her involvement in the 2019 August meeting, which usually witness a massive homecoming from different towns and cities across the world of “Igbo women” groups to their matrimonial rural hometowns, where they unite with their rural-based colleagues.

Remarkably, Imo women’s dream for sustainable economic renaissance was further demonstrated. The Capacity Development Tour provided Her Excellency the veritable platform to empower one woman from every ward, provide free medical outreach and eye treatment, and distribute mosquito nets across the 27 LGAs.

More so, owing to her passion to better lives  she started up business for 15 indigent widows per LGA totaling 405 women, built and furnished a 2-bedroom apartment for an indigent widow, and in collaboration with Microsoft, train 300 women in ICT.

Beyond this, Her Excellency, within the first 100 days as wife of the Executive Governor of Imo State saw to the renovation of the Imo State University Crèche, which previously had a lot to be desired. Again, in recognition of Polio challenges and to further demonstrate the commitment of this present Government in tackling health challenges, Her Excellency flagged off this year’s National Immunization Plus Days in the state, while restating Governor Emeka Ihedioha’s Health vision of making Imo State a health tourism state.

Her speech during the event underscored her passion for families and societal values. “…Hence, the need for us to do all we can to reach every community and enlighten families, to ensure that we reach every nook and cranny of the state and run a massive enlightenment to educate our people on the need to demand better health services so as to ensure that all their children (0-5 months) are fully vaccinated”, she had emphasized.

Generally, it would be recalled that one of the priority areas of Emekea Ihedioha is to reclaim the dignity of the people of Imo such that the state shall no longer be the laughing stock of Nigeria.

Pragmatically, reclaiming the dignity of the people and the state must start by enhancing family and societal values, which according to several analysts emanates from empowering the women.

Therefore, the stakes are high and it is another defining historical moment of socio-economic realism, of realignments and bridge building to secure a greater Imo State for the coming generation. Today’s decisions have got far reaching implications for our future both as a people and as a state.

Tue Oct 1 , 2019
978 Our Reporter   President Muhammadu Buhari of Nigeria, on Monday in Abuja pledged that his administration will continue to adequately fund the judiciary to enable it discharge its responsibilities. The President also said it is the collective duty of the three arms of government to ensure fair justice delivery […] 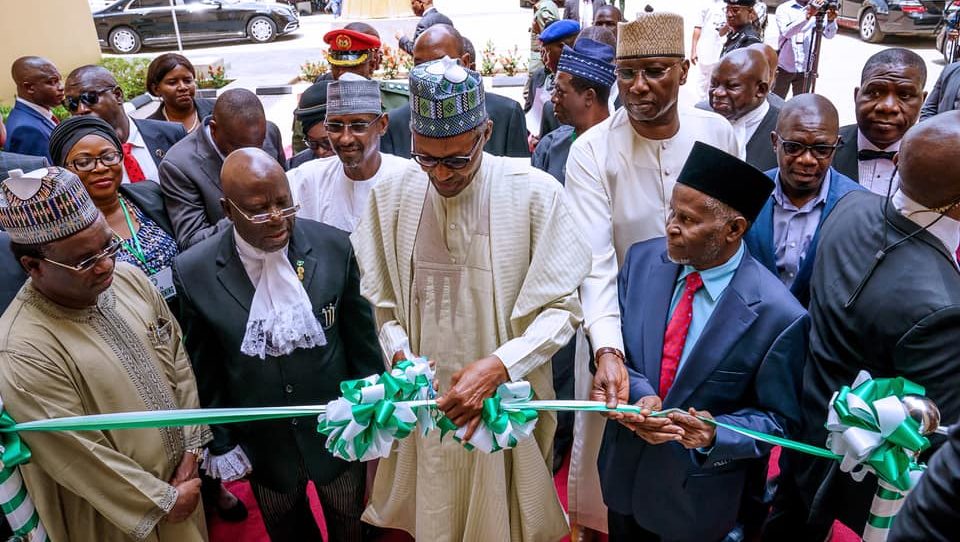