Skip to content
506
President Muhammadu Buhari will today depart Abuja for Riyadh, the Kingdom of Saudi Arabia, to attend the third edition of the Future Investment Initiative (FII) organised by Saudi’s Public Investment Fund (PIF).
Under the theme, ”What’s Next for Global Business?”, the event, which holds from October 29-31, will focus on three key pillars:  Sustainable Future, Technology for Good and Advanced Society.
The three-day event will be held under the patronage of the Custodian of the Two Holy Mosques, King Salman bin Abdulaziz of Saudi Arabia and chaired by Crown Prince Mohammed bin Salman bin Abdulaziz, deputy premier, chairman of the Council of Economic and Development Affairs and PIF.
Given the increased investor confidence in Nigeria’s economy, President Buhari will use the occasion to speak about the economic opportunities that abound in Nigeria, the effectiveness of his administration’s policies to improve the business environment, and invite investors to the country.
It is noteworthy that the total value of capital inflow into Nigeria increased from US$12 billion in the first half-year of 2018 to US$14 billion for the same period in 2019.
The Nigerian delegation will leverage on the resources in Saudi’s PIF, which aims at becoming one of the largest and most impactful sovereign wealth funds in the world, to seek foreign investments in critical projects in the country’s oil and gas sector, particularly the Ajaokuta-Kaduna-Kano (AKK) gas Pipeline – the 614 km-long natural gas pipeline currently being developed by the Nigerian National Petroleum Corporation.
Nigerian officials will see also take advantage of the summit to accelerate discussions on the planned interest of the Saudi oil company, Aramco, to revamp Nigeria’s refineries and new investments in the oil and gas sector.
According to the organisers, the high-profile conference has proven to be a substantial international platform for expert-led debate among investors, innovators and governments as well as economic leaders, with the power to shape the future of global investment, since it was launched in 2017.
The conference is focused on utilizing investment to drive growth opportunities, enable innovation and disruptive technologies, and address global challenges.
More than 4,000 delegates from over 90 countries are expected to participate in the FII 2019, which will also host 12 workshops on different topics including cities, energy, climate, health, data, mobility, food, travel, sports, shopping and youth.
The President will be accompanied by Governor Babagana Zulum of Borno State, Governor Abubakar Bagudu of Kebbi State and Governor Aminu Bello Masari of Katsina State.
Also on the entourage are, Minister of State, Foreign Affairs; Zubairu Dada, Minister of Industry, Trade and Investment; Niyi Adebayo, Minister of State, Petroleum Resources; Timipre Sylva, Minister of Communications; Ibrahim Pantami, the National Security Adviser; Major General Babagana Monguno (rtd), Director-General, National Intelligence Agency; Ambassador Ahmed Rufa’i Abubakar, and the Group Managing Director, Nigerian National Petroleum Corporation (NNPC); Mele Kolo Kyari.
After the investors’ conference in Riyadh, President Buhari will proceed to Makkah, accompanied by close personal aides, to perform the Umrah (lesser pilgrimage) before returning to Abuja.
Share

Tue Oct 29 , 2019
506 Our Reporter   President Muhammadu Buhari on Tuesday commenced his official engagements at the third session of the Future Investment Initiative (FII) in Riyadh, where he will underscore that Nigeria is open for business and progressively becoming the next investment destination of choice in Africa.   The President is […] 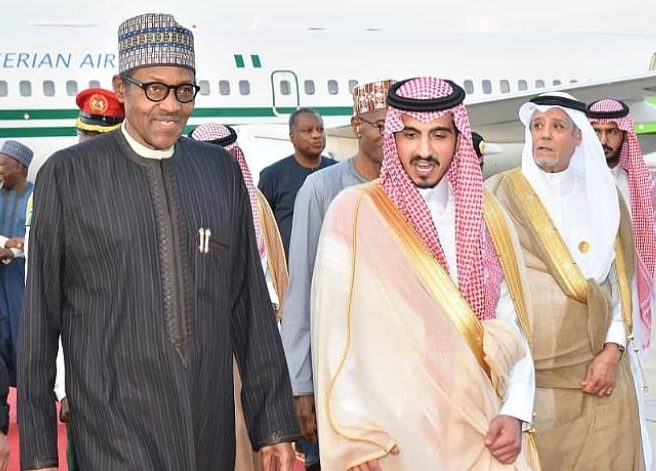