Queen Uzoigwe Comfort; the CEO of Glamorous Models Africa and the organizer of the recently held 2019 Face of Glamorous Models Africa pageant has continued to take more proactive steps in demonstrating her commitments to galvanizing the interest of the youths, especially young girls and strategically re-channel them to national pursuits that will culminate in development and cultural recovery. This was evident on Tuesday in Lagos during a media parley.

Queen Comfort who spoke passionately on the Sustainable Development Goal (SDG) 16, which comprises of Peace, Justice and Strong Institutions, noted the complementarities between culture and peace. “To build peace that leads to development, it is necessary to have mutual understanding and tolerance between cultures. If people accept cultural diversity and understand cultures other than their own, it will contribute to the prevention of conflict, building of peace and development. Hence, cultural diversity in Nigeria should be seen as an asset rather than a burden,” miss Uzoigwe explained.

Continuing, the Enugu-born Fashion and Runway Model observed that with an estimated population of about 130 million and over 250 ethnic nationalities, Nigeria ranks the most populous country in black Africa. Accordingly the important part of sustainable peace is cultural diversity.

“The emergence of differing culture and maintenance of cultural diversity has raised the possibility of the human race to adapt to environmental change in the future. Additionally, in order for culture itself to retain its creativity and vitality, the existence of other cultures is a must. New ideas are born from other cultures, and the source of cultural creativity lies within constant encounters between different cultures,” she added.

Furthermore, the 400 level Physics undergraduate of the Nnamdi Azikiwe University, Awka congratulated the winner of the 2019 edition of the Face of Glamorous Models Africa; Miss Ebereuche Fortunate, and re-echoed the strategic importance of her position especially now that the issue of the Girl-Child is on the front burner of global discourse.

“Face of Glamorous Models Africa as a Pageant built on the foundation of decency to bring out the best in models, and upcoming models to limelight tends to break boundaries and barriers posed by stereotypes and exclusion, including those directed at aspiring models. As an Agency, innovators and initiators of global movements, we are creating a world that is relevant and future generations. So, we will use our platform to continue to call on government to start placing values on models so as to recognize the enormous potentials in the Modelling Industry”, she said.

While noting that the Face of Glamorous Models Africa will make use of the media of mass communication as instruments of social mobilization and enlightenment to able to galvanize large army of Nigerian youths, she opined: “the moment the youths of Nigeria are sufficiently educated about the essence of and the philosophy behind Nigeria’s rich cultural diversity, it is easier for the different segments of the complexity that Nigeria is, to now unify and decide to live in peace, harmony, equality and respect for equity, social justice and practice democracy the way it should be.”

Queen Uzoigwe Comfort Ugochi; the first ever Face of Okpanku Pageant concluded by asserting that one of the fundamental objectives of her Agency and the Face of Glamorous Models Africa Pageant is to promote our cultural values. According to her, “to promote cultural values one has to create the enabling environment for the proper promotions of the different cultural activities that we find Nigeria”.

Queen Comfort was in the company of  Miss Ebereuche Fortunate and Miss Prisca John; the 2019 Face of Glamorous Models Africa’s winner and the 2nd runner up respectively.

Fri Dec 20 , 2019
241 Godwin Obaseki, Edo State Governor, and Pastor Osagie Ize-Iyamu, his main challenger in the Governorship Election in 2016, will both slug it out for the ticket of the All Progressives Congress (APC) in next year’s governorship election in the state. Although the two are expected to be the main […] 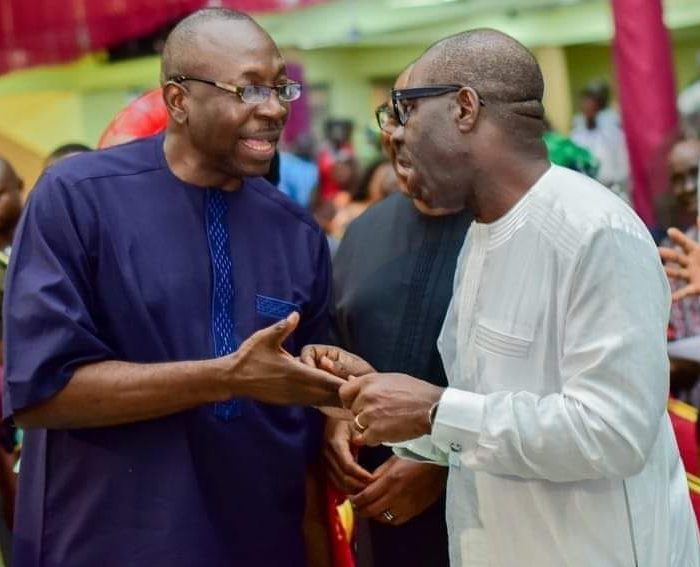