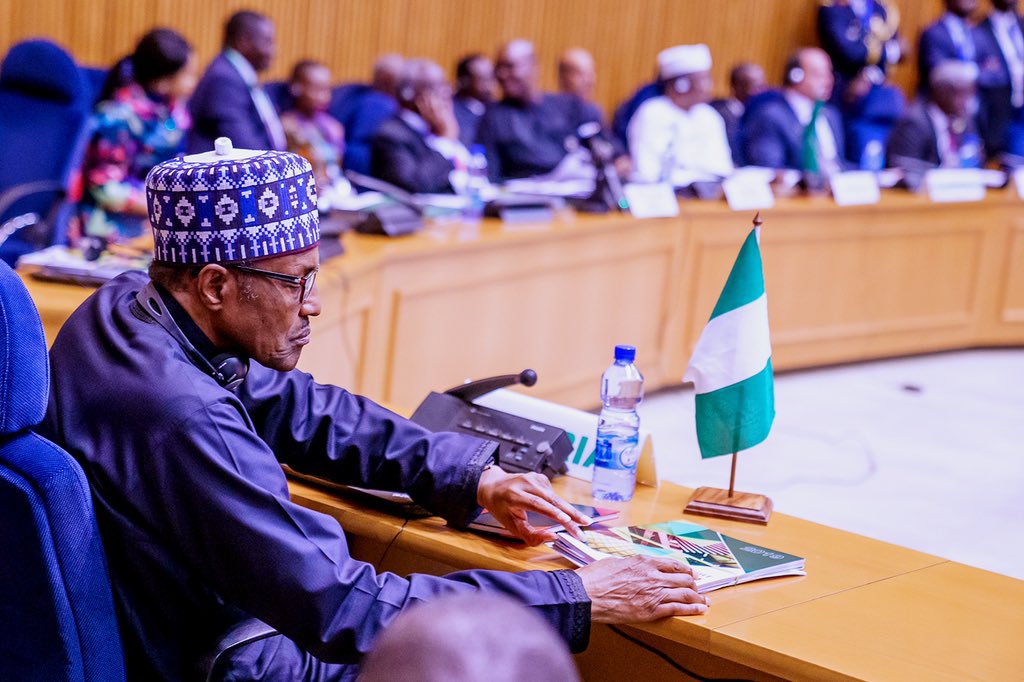 President Muhammadu Buhari of Nigeria has commended the renewed vigour by ECOWAS member countries to mobilize their own resources to combat terrorism.

President Buhari who spoke on Saturday at the High Level meeting of the African Union Peace and Security Council on the State of Peace and Security in Africa at the 33rd AU Summit in Addis Ababa, Ethiopia called for new strategies by the Union to effectively prevent, manage and resolve conflicts in the face of new circumstances and emerging challenges.

While informing that Nigeria has fulfilled its financial obligations to the AU Peace Fund up to 2019, the Nigerian President pledged to continue investing on peace and security on the continent.

On ECOWAS matters, President Buhari affirmed Nigeria’s commitment to continue to serve as a strong contributor to the peace roles played by the regional bloc.

Also, he highlighted the collaborative leadership of the AU with other Regional Economic Communities in resolving conflicts on the continent.

‘In Burkina Faso, we (ECOWAS) pledged to mobilize one billion US dollars to address the challenges of insecurity in our region and the Sahel. In Guinea Bissau, ECOWAS successfully midwifed the general elections.

”Nigeria along with ECOWAS member states led in the restoration of democracy and peace in the Gambia,” he explained.

On security challenges in Africa, the Nigerian Leader said it was regrettable that terrorism, violent extremism and other forms of vicious conflicts had continued to cause mayhem and untold crisis on the continent.

”Nigeria condemns, in the strongest terms, the perpetrators of terrorism in Libya, the Sahel, Lake Chad Basin, and parts of the Horn of Africa.

”We reiterate that efforts must continue to be pooled to mitigate this dreadful violence and secure the future of our continent,” he said.

On new strategies to resolve conflicts on the continent, the President said: ”The AU must strengthen its own capacity for mediation and develop an effective intervention roadmap.”

He added that more emphasis should be placed on promoting national dialogue, reconciliation and social cohesion in order to rally all actors towards sustainable peace.

On the Peace Fund, the President reminded the meeting that drawing from the Kigali and Johannesburg Assembly Decisions, the fund is structured for the internal peace support arrangements within the continent and not as resources to subsidize the mandate of the UN Security Council.

”In this regard, my delegation will always fervently contest attempts to make Africa subsidize the primary responsibility of the UN as clearly provided in its Charter,” he said.

Furthermore, President Buhari welcomed the decision of the AU Peace and Security Council (AUPSC) to adopt the regional stabilization strategy for the Lake Chad Basin and the renewal of mandates of the Multi National Joint Task Force (MNJTF) and the G5 Sahel Joint Force.

He told the meeting that Nigeria was very encouraged by the resolution of the continent’s standing decision-making body for conflict prevention, management and resolution, on the Lake Chad Basin.

”We are hopeful that the Inter Water Basin Transfer Initiative for the recharging of the Lake Chad will address some of the drivers of terrorism, particularly the impact of climate change and inter-communal clashes over access to natural resources. ”We equally call on the Assembly to direct the full implementation of these AU-inspired initiatives,” he concluded.

Generally, The Peace and Security Council (PSC) is the standing decision-making organ of the AU for the prevention, management and resolution of conflicts. It is a collective security and early warning arrangement intended to facilitate timely and efficient responses to conflict and crisis situations in Africa. It is also the key pillar of the African Peace and Security Architecture (APSA), which is the framework for promoting peace, security and stability in Africa.

The Protocol Relating to the Establishment of the Peace and Security Council was adopted on 9 July 2002 in Durban, South Africa, and entered into force in December 2003. The PSC became fully operational in early 2004. The PSC Protocol, together with the PSC Rules of Procedure, the AU Constitutive Act and the conclusions of various PSC retreats, provide operational guidance to PSC activities.

Mon Feb 10 , 2020
452 By The World Satellite.   President Muhammadu Buhari of Nigeria has affirmed Nigeria’s continued recognition of the centrality of science and technology in the development process and will ensure adequate resource allocation for research and development. Speaking on Sunday at a breakfast meeting of the Commission on Science and Technology […]