Nigerians home and abroad were recently greeted with the news of the dethronement of one of the most important Emirs in the Northern Nigeria; Muhammed Sanusi II, who was until recently the Emir of the Kano Emirate in the Northern part of Nigeria.

While many believe he was sacked for opposing Mr. Ganduje’s re-election last year and for speaking truth to power, Global Advocacy for African Affairs reacting to the incident called for a clear separation of politics from Africa’s well established and respected traditional institutions.

Speaking to news men at its Abuja, Nigeria office on Tuesday March 10, 2020, The Executive Director of the Africa’s leading development advocacy organization; Chrys Anyanwu queried the rational of the constitutional provisions which confers on the Executive Governor of a state who is clearly a politician and a member of a particular political party the authority to appoint, manipulate and dethrone traditional institutions at will.

He recalled how traditional authority used to be a distinguishing feature in the landscape of contemporary Africa. “In many African countries, traditional leadership remains important in organizing the lives of the people at the local level despite modern state structures.

“Traditional leaders deliver essential modern services that African states do not always succeed in delivering. They act as intermediaries between the government and the local population; and they are often a local force to reckon with; wielding a local and general influence in their own communities due to their control over resources and people,” Mr. Chrys explained.

Furthermore, he frowned at the whole politicization of this highly revered institution which he said followed the political independence of many African countries where many African governments saw chiefs as threats to their powers and impediments to the modernization and nation building and tried to curtail their role in local governments and national politics.

According to him, this has gotten worse by the day following the bastardization of our political space. Traditional rulers are now being seen as appointees of the governors who also demands loyalty from them; this according to him ought not to be

The organization therefore advised Nigerian government and by extension other African governments to see the Kano situation as an opportunity to strengthen the traditional institutions in Africa by revisiting the laws setting up and also guiding these institutions with a view to harnessing the full benefit of these very important institutions.

Fri Mar 13 , 2020
466 By Dan Ugwu.   The Dethronement of Emir Muhammad Sanusi II as the Emir of Kano has continued to stir up controversies, and interestingly the Kaduna State Governor; Gov. Nasir El-Rufai is at the epicenter of this controversy too. In the space of 48 hours, Muhammad Sanusi II was […] 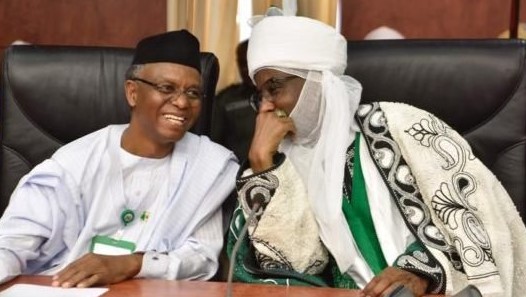