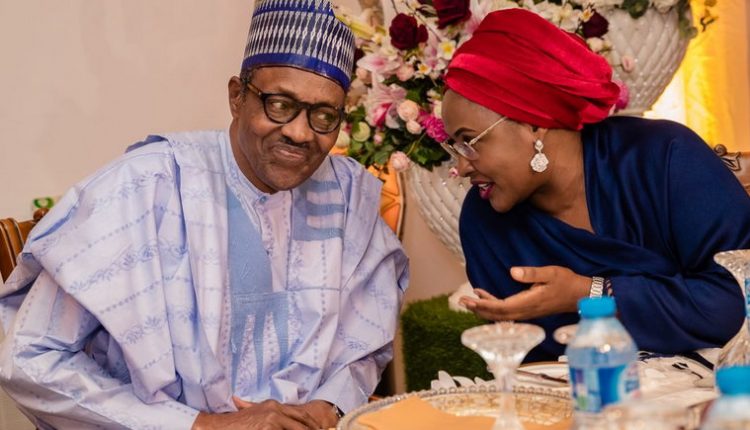 THE Prominent Civil Rights Advocacy group; HUMAN RIGHTS WRITERS ASSOCIATION OF NIGERIA (HURIWA) has asked the Nigerian President Muhammadu Buhari to take charge of his domestic issues in the Presidential mansion in ASO ROCK, Abuja to check the constant disgraceful infighting and squabbles between his Personal aides and his Wife; Mrs. Aisha Buhari.

The Prominent Civil Rights Advocacy group HUMAN RIGHTS WRITERS ASSOCIATION OF NIGERIA (HURIWA) has also called for a thorough investigations of the incident in the Presidential mansion in which there where reported use of lethal weapons, which the group said should be viewed as “attempted coup plot”. “Whomsoever fired the shots should be investigated and sanctioned just like a coup plotter “.

The Rights group said the consistent quarrels by members of his household has the capacity to damage the nation’s brand internationally and make us a laughing stock of the International Comity of Nations just as the HUMAN RIGHTS WRITERS ASSOCIATION OF NIGERIA (HURIWA) warned that the seemingly uncontrollable disagreements and supremacy battles or what is commonly regarded as power tussle in the Presidential mansion has the near- infinite capacity to paint Nigeria graphically in the global community as a Banana republic.

In the same vein, the Group observed that the perception of Nigeria as a nation with a President that is not in charge of his domestic affairs could have massive impacts in the Country’s drive to attract foreign direct investments. “Serious investors overseas will not be idiotic to take their hard-earned cash in this Covid-19 era of economic recession to a country whose political leader has no control of what goes on within his own home.

“The domestic health of the political leadership of sovereign nations is a basic requirement and indeed the global determinant for knowing the stability of a given nation. A nation whose President is busy settling quarrels certainly cannot be assumed to be a Democratic nation chasing the aspiration of becoming a global economic giant”.

HURIWA in the media statement, endorsed jointly by the National Coordinator; Comrade Emmanuel Onwubiko and the National Media Affairs Director; Miss Zainab Yusuf said it was reacting to the development in the Presidential mansion in which it was reported that there were gun shots just as  some key aides attached to the First Lady; Mrs. Aisha Buhari, were reportedly arrested by personnel of the Nigerian Police.

“HURIWA is hereby telling the Nigerian Government that Nigeria needs a leader who will not be distracted with regular disagreements that sometimes spill out into a dramatic PUBLIC SHOW OF SHAME. The Rights group said Nigeria has greater issues that demands the full attention and focus of the President to resolve, such as rebuilding the collapsed national infrastructures of health, education, Water and restoration of security across the Country, than for the President to be weighed down by constant squabbles by his family members and aides over contestation for supremacy”.

The Prominent Civil Rights Advocacy group; HUMAN RIGHTS WRITERS ASSOCIATION OF NIGERIA (HURIWA) quoted the media as stating that a dependable source further disclosed that the tension rocking the seat of power’, and midwifed by the sudden arrest of the First Lady’s aides is not unconnected to the ‘power-play game’ between an aide to Mr. President and his wife, Aisha.

HURIWA recalled that in a Twitter post on Friday, the First Lady called on the Inspector-General of Police (IGP); Mr. Mohammed Adamu  to immediately order the release of her close security details even as the sensational but ambiguous tweet reads: “…Finally, I call on the IGP to release my assigned Staff who are still in the custody of the Police in order to avoid putting their lives in danger or exposure to Covid-19 while in their custody.”

The Rights group said the fact that this latest public spat amongst members of the first family and close Presidential aides is not the first time that it was happening, but it is the opinion of the Rights group that the information that filtered into the media that there was a security breach in the Presidential Villa with gunshots been fired within the living quarters of the first family is a spectacular embarrassment not just to the current administration but the entire disgraceful scenarios have wider implications and a tragic and adverse economic setback on Nigeria because what it conveys is the impression that no one is in charge in the Presidential Villa.

HURIWA expressed shock that these constant infighting between family members of the President and his close aides which have happened about three times now are definitely seeking to validate the claims made by the Director of the Europe based Indigenous peoples of Biafra (IPOB); the British born Nigerian Mr. Nnamdi Kanu who had stated many times that “there is a vacancy in the Villa”.

“HURIWA is strongly appealing to President Muhammadu Buhari to put an end to these spectacles of shame going on in his household right inside the publicly funded residential mansion of the first family of Nigeria for the moments”.

Sun Jun 14 , 2020
343 By HURIWA.   From the foremost Civil Rights Advocacy group; HUMAN RIGHTS WRITERS ASSOCIATION OF NIGERIA (HURIWA) came a very strong condemnation of the Kaduna and Kano States’ governments for failing to stop the abduction of Christian girls and their forced conversion to Islam by some unscrupulous persons aided […]