Bothered by the apparent failure of the Imo State Governor; Mr. Hope Uzodinma and the pliant House of Assembly to take steps to check the growing number of attacks by armed Fulani terrorists and herdsmen in parts of Imo State, the Prominent Civil Rights Advocacy group-: HUMAN RIGHTS WRITERS ASSOCIATION OF NIGERIA (HURIWA)  has condemned the trend and strongly canvassed the passage and enforcement of a legislation to ban outdoor and open grazing of animals all over Imo State and to equip the communities to set up active vigilantes in addition to the community policing mechanism recently unveiled in the state.

Besides, the Rights group has admonished Governor Hope Uzodinma to tone down the anti-opposition party’s rhetorical warfare being waged by his administration against the major opposition platform of the People’s Democratic Party(PDP) and to begin proper governance in Imo state, which is seriously lacking, given the widespread discontent and mass dissatisfaction expressed by Millions of the good people of the state who are legitimately worried about the lack of developmental focus by the state administration, which has created the security vacuum that have impacted negatively on the wellbeing of the people as manifested by the growing rates of killings and attacks orchestrated and organised by armed Fulani herdsmen rampaging all around the farming communities in the three Senatorial zones of Orlu, Okigwe and Owerri in the last couple of Months.

In a statement to the media by the National Coordinator; Comrade Emmanuel Onwubiko and the National Media Affairs Director; Miss Zainab Yusuf, HUMAN RIGHTS WRITERS ASSOCIATION OF NIGERIA (HURIWA)  said it was unfortunate that palpable tension had enveloped Obudi Agwa community in Oguta council area of Imo State following marauding Fulani herdsmen attacking and killing an indigene of the community in his farm.

“HURIWA is shocked to learn that for two weeks since after that gruesome murder of Elder Ozoemena Iriaka who had gone to his farm in the morning hours when he saw Fulani herdsmen grazing their cattle on his farm and that he had confronted for grazing their cattle on his farm, the Imo State House of Assembly and Governor Hope Uzodinma are still unable to put pressure on the relevant security forces in Imo State to apprehend the killer Fulani herdsmen and bring then to justice.

HURIWA lamented that the inaction of the Imo State government is the motivating factor to these armed marauders who seem to have upped the ante of their murderous attacks to other sections of the state including the sexual violations and murder of a mother of four, which till date since after two weeks is yet to be resolved.

HURIWA stated that the primary duty and responsibility of government is to secure the lives of the citizens just as the Rights group said it was regrettable that even when it was further learnt that the deceased had tried to chase away the cows from his farm, an action which had angered the herdsmen who attacked him with their machetes, inflicting deep cuts on the back of his head as he tried to escape from them, the Imo State administration seems to be working on the theory that soon the matter would be swept under the carpets.

“We reject this absolute neglect of the primary Constitutional responsibility of government by the current political establishment in Imo state and we call on the governor and the State House of Assembly to pass the Anti-open grazing law in Imo state and to stop the infiltration of the state by killer armed Fulani herdsmen.

“Hope Uzodinma as far as the law is concerned is the chief security officer of Imo state by virtue of the legal fact that he is the governor of Imo State. He must desist from thinking that he owns his allegiance to the Fulani Caliphate going by the circumstances of his emergence through a controversial verdict of the Supreme Court of Nigeria presided over by the Fulani born Sharia jurist; Alhaji Muhammad Tanko of Bauchi State.

“Hope Uzodinma must govern Imo State for the benefit of Imo people and the best way to go about it is to eliminate all traces of threats to the security and lives and property of the good people of Imo State for the period of time that he would preside over the affairs of Imo state. Imo state people should organise and not agonize to protect their ancestral lands from being overrun by foreign mercenaries masquerading as Fulani herdsmen. Imo State must never be allowed to become a theatre of terrorism”.

HURIWA has similarly tasked Governor Hope Uzodinma to arrest the suspected killers who allegedly killed a 45-year-old woman; Mrs. Susanna Iwuoha, after raping her. HURIWA recalled that Mrs. Iwuoha; a mother of four from Alaocha, Umuchiaku, in Lowa-Okata autonomous community, Ihitte Uboma Local Government Area, was found dead with her face immersed into a local stream some days after she left home for her farmland.

The Rights group said it is possible that she was killed by the same armed Fulani herdsmen who killed the elderly farmer in Oguta because the woman, whose undergarment was carted away by her attackers, was discovered by a community search party after her children raised the alarm over her disappearance since June 3.

One Bernard Ekeka, who is believed to have seen the unidentified attackers, was also killed. According to Iwuoha’s 15-year-old daughter; Ugochi, they had earlier gone to the farm together for weeding and returned home before her mother decided to return later that day to harvest some crops.

HURIWA is once more charging the Imo State Governor and the State House of Assembly to rapidly pass the anti- open grazing law if there is none to put to a permanent end the rampaging attacks of armed Fulani herdsmen just as the Rights group said the Imo State government should seek for ways of galvanizing a regional approach towards instituting a SOUTH EASTERN ANTI-OPEN GRAZING LAW and to set up a regional security network to protect the region from all forms of violent attacks.

Relatedly, HURIWA thinks the National Assembly is not committed to the fight against sexual violations of youngsters by rapists who are unleashing venomous attacks on young girls and boys all around the Country.

“HURIWA is apprehensive that all the noises coming from Abuja about the issue of combating RAPE and sexual attacks against younger persons by mostly Men, are just cosmetic and artificial wailing of pretenders who will simply wait for the mass of the citizens to stop talking about these rape cases in the social media and then the Country returns to the business as usual default format that it has been for over 60 years.

“The National Assembly has the knife and the yam and so why are they crying? They are the legislators who can look at all the laws relating to sexual offences and then fundamentally reform this archaic legal framework to bring it in tandem with the demands of the 21st century compliant Nigerian nation.

“The Presidency should stop the public show and the media showmanship over the cases of RAPE and sexual attacks against younger persons in Nigeria. If you are in government, your responsibility is to maintain law and order and punish offenders and not to cry like little babies when the system seems to have failed our children by not protecting them from murderous rapists.

“The Presidency runs the Police, which has failed to prosecute sexual violators. The Presidency is where the Federal Attorney General and Minister of Justice works. Law Reform Commission is located in the Presidency and so why is the Federal Government not seen activating measures to strengthen the laws against rapists so as to introduce strong enough sanctions and legal penalties that would serve as deterrence to the violent rapists who are running riots all over the Country?”

Tue Jun 23 , 2020
496 By The World Satellite. Nigerian President Muhammadu Buhari has expressed worry over the decision of francophone countries that form the West African Economic and Monetary Union (UEMOA) to replace the CFA Franc with Eco ahead of the rest of Member States. Speaking at a virtual extraordinary meeting of the […] 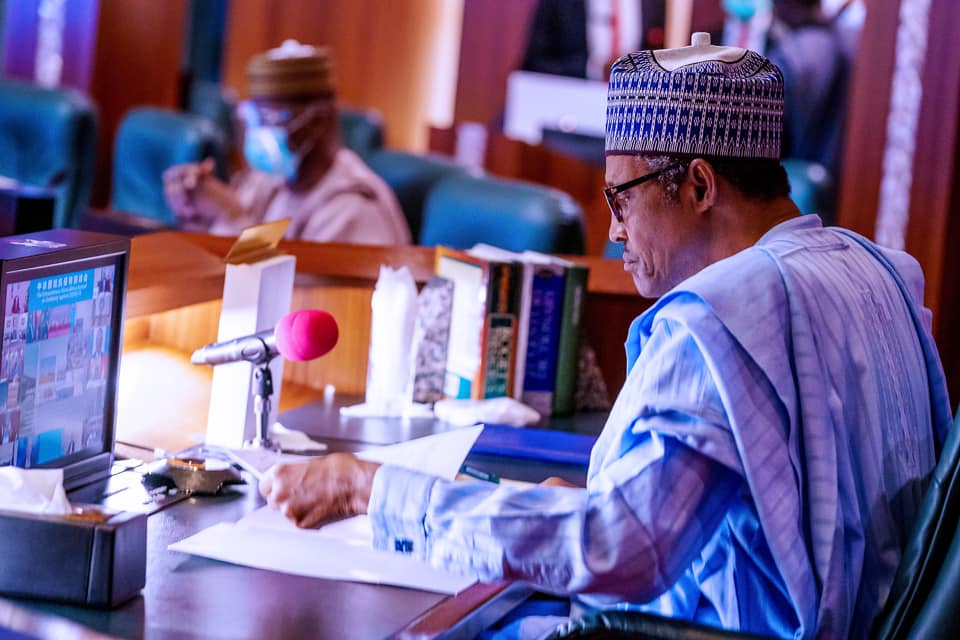