The Prominent Civil Rights Advocacy group-:  HUMAN RIGHTS WRITERS ASSOCIATION OF NIGERIA (HURIWA) has carpeted the Chief of Air Staff; Air Marshal Sadique Abubakar for stating that the Nigerian Air Force cannot protect Southern Nigeria as much as it would because of the commitments of the Nigerian Air Force in waging war on terror in the North East of Nigeria just as the Rights group said he should apologise, retract his offensive statement or be sacked for displaying crass incompetence and showing that he is not properly in charge of the Nigerian Air Force but is devoted to protecting Northern Nigeria.

“HURIWA is miffed to read from a very reputable online media forum (Global Sentinel) administered by a highly reputable professional journalist that has covered the Armed Forces of Nigeria for over a decade in Abuja,  that the Chief of Air Staff; Air Marshal Sadique Abubakar uttered such a disappointing and absolutely unprofessional and unacceptable public statement in a written press statement to the effect that he is unable to defend all of Nigeria.

“This is the most unfortunate public speech from a military General since the amalgamation of the Country and is a direct breach of the core essence of the constitutional responsibility and functions/powers of the Armed forces of the Federal Republic of Nigeria as enshrined in sections 217 to 220.”

HURIWA further affirmed that the unprofessional statement is symbolic and very toxic at the same time. “It is saying that the security interests of Southern Nigeria are not guaranteed and it shows that the loyalty of the Chief of Air Staff is with and for the North East of Nigeria and not even with the North Central, North West or Southern Nigeria as a whole.  Is this why the majority of the National military assets of the Country are located in Northern Nigeria?

“The President and Commander-in-chief of the Armed forces of the Federal Republic of Nigeria; Major General Muhammadu Buhari (as he then was) should sack this officer who has used his mouth to tell millions of Nigerians of the Southern extraction that the Nigerian Air Force under him is not committed to protecting the South as much as it does in the North.”

“HURIWA hereby refers the Chief of Air Staff to the Constitutional provisions so he understands the weight of the very unfortunate and highly uncoordinated statement that he has just been reported to have made. These are what the Constitution says from section 217 to 220 thus: “217. 1C Armed Forces of the Federation

2. The Federation shall, subject to an Act of the National Assembly made in that behalf, equip and maintain the armed forces as may be considered adequate and effective for the purpose of-

a. defending Nigeria from external aggression;

b. maintaining its territorial integrity and securing its borders from violation on land, sea, or air;

c. suppressing insurrection and acting in aid of civil authorities to restore order when called upon to do so by the President, but subject to such conditions as may be prescribed by an Act of the National Assembly; and

d. performance such other functions as may be prescribed by an Act of the National Assembly.

3. The composition of the officer corps and other ranks of the armed forces of the Federation shall reflect the federal character of Nigeria.

4. The National Assembly shall have power to make laws for the regulation of-

a. The powers exercisable by the President as Commander-in-Chief of the Armed Forces of the Federation; and

b. The appointment, promotion and disciplinary control of members of the armed forces of the Federation.

219. The National Assembly shall-

a. in giving effect to the functions specified in section 217 of this Constitution; and

b. with respect to the powers exercisable by the President under section 218 of this Constitution, by an Act, established a body which shall comprise such members as the National Assembly may determine, and which shall have power to ensure that the composition of the armed forces of the Federation shall reflect the federal character of Nigeria in the manner prescribed in the section 217 of this Constitution.

220. 1. The Federation shall establish and maintain adequate facilities for carrying into effect any Act of the National Assembly providing for compulsory military training or military service for citizens of Nigeria.

2. Until an Act of the National Assembly is made in that behalf the President may maintain adequate facilities in any secondary or post-secondary educational institution in Nigeria for giving military training in any such institution which desires to have the training.”

The Prominent Civil Rights Advocacy group HUMAN RIGHTS WRITERS ASSOCIATION OF NIGERIA (HURIWA) recalled that the Chief of Air Staff Abubakar in a statement by the Director of Public Relations and Information (DOPRI), Air Commodore Ibikunle Daramola, made this remarks on Tuesday, while commissioning 2 blocks of 10 x one bedroom Single Officers’ accommodation at the 305 Special Mobility Group (305 SMG), Calabar, Cross River State.

HURIWA  quoted the media report as stating that: “The CAS, who was represented by the NAF Chief of Logistics, Air Vice Marshal Mohammed Yakubu, noted that “the current national security imperatives, particularly the ongoing intensive air operations to deal with bandits and terrorists in the North West and North East of the Country, respectively, had made it difficult to ensure that 305 SMG has adequate platforms to effectively execute its assigned role of securing parts of the southern axis of the Nigerian airspace”.

” HURIWA is worried by the larger implications of this statement which has the overall consequences of affirming that the Southern part of Nigeria is deliberately being exposed to attacks from centripetal and centrifugal forces. So there is the urgency of the now for the Chief of Air Staff to be compelled by the Nigerian President to provide clarifications of this disturbing statement within the next 24 hours or we approach the President to so compel him or if nothing is done we will petition the global community to intervene to stave off any threats to the sanctity of the lives of the people of Southern Nigeria”.

HURIWA said also that if after 24 hours there is no retraction or clarification and a profound apology from the Chief of Air Staff then  it will be writing to the President of the Federal Republic of Nigeria to within 78 hours reassure Southern Nigeria that his government is not for the North and by Northerners and to correct the impression that the South cannot receive the same kind of military cover like the North as credited to his Chief of Air Staff. We will petition the United Nations and World leaders to protect the South should the Nigerian President not concretely reassure Southern Nigerians that they are to enjoy equal protection like the North. Honestly, this is a highly worrying development”.

Who Are the Looters of Imo Pension Fund; Government or The People?

Mon Jul 6 , 2020
464 By: Dan UGWU.   Successive administrations in Imo State from Achike Udenwa to Hope Uzodimma have all hired the services of Consultants to verify IMO State Pensioners and Staff strength. These mercenaries were paid in Millions of Naira of IMO scarce resources. At the end of all those exercises, […] 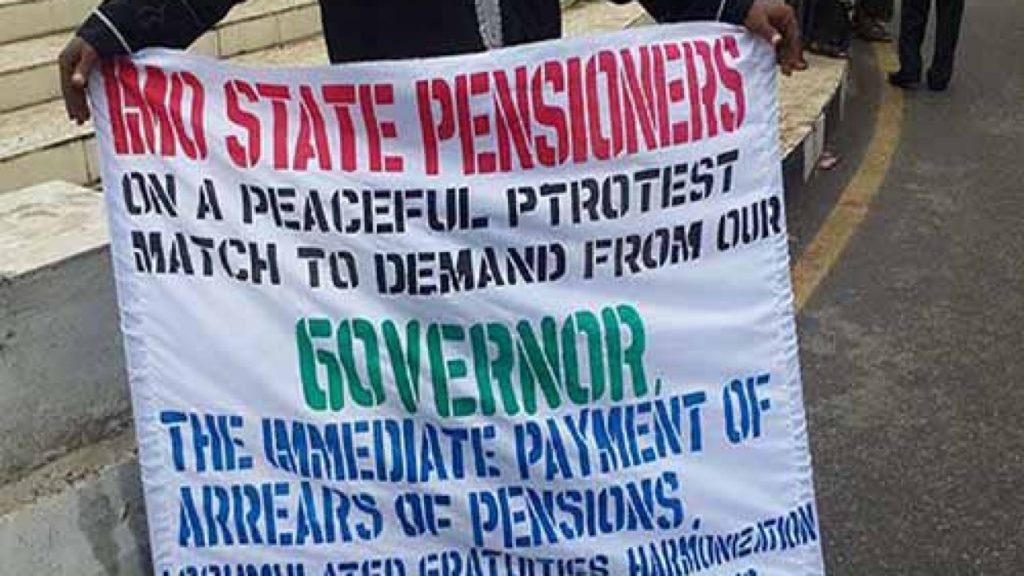