Prominent Civil Rights Advocacy group; HUMAN RIGHTS WRITERS ASSOCIATION OF NIGERIA (HURIWA ) has received with shock and absolute disappointment  the trending news on the corruption  list of some National Assembly members and serving judges of the Federal High Court of Nigeria to be among the alleged failed contractors that ruined NDDC.

“We think that this should be the beginning of a cleansing exercise of the NDDC that is if the President is committed to achieving such a laudable agenda.  The corruption in the NDDC since inception is exactly the reason for some of the worst kinds of criminal negligence and extreme marginalization of the crude oil rich Niger Delta communities.

“We are by this brief media Statement challenging Mr. President not to downplay the very essence and the seriousness of these spectacular allegations made against these so called privileged politically exposed Nigerians and even judge of the Federal High court.

“We are delighted that the list of this corrupt Nigerians who collectively destroyed The NDDC has emerged but at the same time we are unhappy that the Minister for Niger Delta Affairs Mr. Godswill Akpabio had kept all this information to himself until he was prodded by the investigating panel of the National Assembly to so release them either directly or through alleged leakage to the media.

“This is to show that the minister participated in a cover up scheme for this privileged Nigerians so he has to resign or be dismissed with immediate effect.

“We are calling for the arrest of those Nigerians listed to have failed in delivering their contractual agreements to the NDDC. We think that the NJC should suspend Justice Nnamdi Dimgba of the Federal High Court of Nigeria, Abuja division until he is proven not guilty,” HURIWA averred.

HURIWA recalled that the names of Nigerians who allegedly got Niger Delta Development Commission (NDDC) contracts have emerged.

“The list is reportedly different from the one sent to the House of Representatives Speaker; Femi Gbajabiamila, by the Minister for Niger Delta, Godswill Akpabio. The new names published by SaharaReporters include a judge, former governors, All Progressives Congress (APC) stalwarts, government officials, Police, Army officers, EFCC officials and monarchs.

“The fresh list contains project descriptions, local government areas, proposed contractors, contact details (including phone numbers), project sources and dates of award. The alleged beneficiaries are TC/COP Villa/MD, who got several contracts for undisclosed amounts; AIG Operations, Abuja, got contracts worth N186,771,348.75, while DIG/Ochei got contract worth N349,976,919.86; CSO/CNC got contract worth N150,342,858.75.

“Dozens of House members would soon appear before the Committee on Ethics and Privileges probing their purported involvement in the N100bn projects awarded by the NDDC in 2018. Gbajabiamila directed the committee to commence probe of those Akpabio indicted.

“Meanwhile, Akpabio’s rejoinder was contained in letter to the Clerk of the House with ref no. MNDA/HM/04/IV/158.

“He said the investigating Committee on NDDC refused to give him the opportunity to explain that reference to most NDDC contracts yearly being awarded since 2001 from the records allegedly to members of the National Assembly in both Chambers were done without the knowledge of the alleged beneficiaries.

“The two Chairmen of the Committees in both Chambers had adequate knowledge. The 2019 budget passed in February and harmonised between the 4th and 5th of March 2020 was received by the Commission in the middle of April, 2020, when same was designated to expire on the 31st of May, 2020.

“He stated that the Clerk of the National Assembly forwarded a letter Ref. NASS/CNA/115/VOL.38/1175, dated 20th March, 2020, without attaching the budget details indicating that the 2020 budget of the NDDC passed into Law was being fonlvarded (copy of the letter is attached as Annexure ‘A’).”

“Akpabio recalled that the anomaly was brought to the attention of the Senate Ad Hoc Committee investigating a purported financial recklessness by the management of the commission in July 2020.

“It has always been known that the two chairmen of the committees on NDDC in both chambers yearly exhibit unusual influence to the exclusion of committee members and even the management of the NDDC in appropriating funds to details embellished in the budget after passage of line items at the plenaries.”

“Akpabio attached documents showing nature of contracts, amounts (in some cases), dates, and beneficiaries, including the ones awarded to the NDDC committees chairmen in the House of Representatives and the Senate”, HURIWA explained.

Chairman of EFCC Must Not Be A Police Officer Again; - Says HURIWA

Wed Jul 29 , 2020
578 “The best methodology to break the chain of inefficiency and lack of professionalism in the top echelons of the prime anti-corruption institution in Nigeria – The Economic and Financial Crimes Commission (EFCC) is for President Muhammadu Buhari to appoint a distinguished serving officer of the Economic and Financial Crime […] 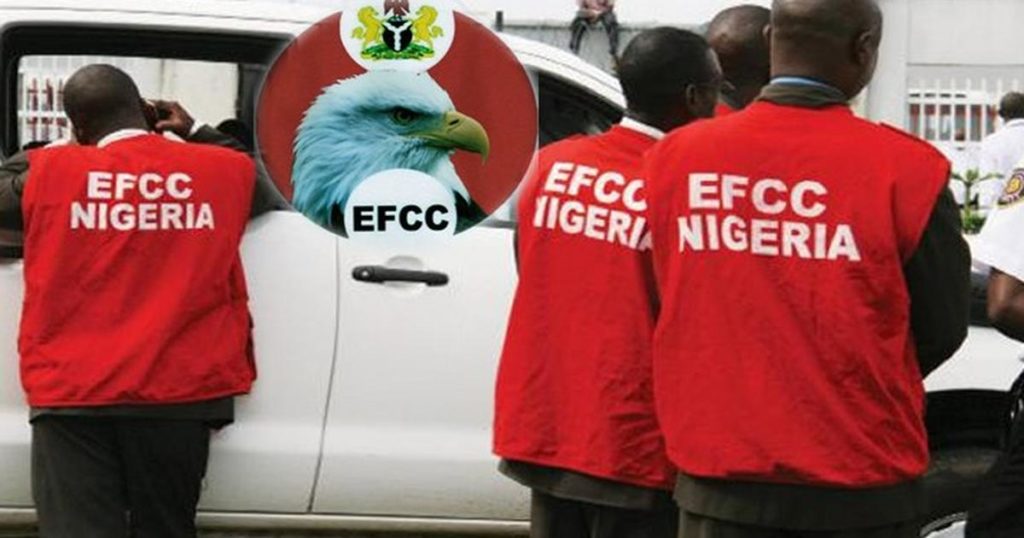