The reaction, which has greeted the passage of the Companies and Allied Matters Act 2020 since its passage earlier this month has been one with two poles of extremities.

One the one hand, the business community have embraced it as one of the laudable reforms made in the business environment in the last thirty years, on the other, Incorporated Trustee Organisations, especially some churches, are outraged at having received the rough end of the stick.

The grievance climaxed in the statement signed by the Christian Association of Nigeria (CAN) at its meeting on the 20th of August, 2020 in which it mandated the President to withdraw the Act or at least a part of it. The position of these Christian leaders form the fulcrum of this discourse.

The main grievance of CAN is the ‘offensive’ Section 839 of the Act which gives the Corporate Affairs Commission (CAC) (the agency of government which regulates the activities of businesses and corporate organisations) the powers to remove trustees (in this case, General Overseers, Founders, Senior Pastors) upon reasonable belief of misconduct, fraud or mismanagement and replace them with managers of their discretion.

They argue that the establishment of a church has a spiritual foundation and the invitation of a manager who obviously does not share the spiritual insight of the founders of the church would undermine the church, insidiously defeating its purpose. They have further vented that since the government did not contribute a dime to the establishment of the church, why should they wade in to control their activities for any reason?

Notwithstanding the views of these church leaders, it is pertinent to state that the moment it becomes the incumbent on any governmental authority to grant a person any right or license to operate, its right to regulate the person’s activities immediately inures.

This position is apparent in the regulation of private companies, public companies, companies limited by guarantee by the same Commission, wherein Directors are replaced by liquidators, receivers and managers upon allegations of mismanagement.

This is so, even when the CAC contributes nothing to the establishment of these business organisations. Of course, from the point of registration, the CAC already has the right to determine and reject the proposed name, objectives, trustees, constitution or outrightly refuse registration of the association, if they do not conform with its criteria.

The power of regulation is already embedded at registration! If that is not enough evidence, the government regulates the landholding capacities of the Association and even the attendance and conduct of members as was experienced during the COVID 19 lockdown wherein churches were summarily asked to close down.

Again, one of the objectives of government through its regulatory authorities is to ensure that the public interest is protected at all times. It is without doubt that bone chilling instances of fraud have been recorded by many so-called trustees of NGOs.

In many instances, money is collected from unsuspecting individuals both within and outside Nigeria for all kinds of ‘selfless’ and ‘non-profit’ purposes, after which the trustees neglect, refuse or fail to meet the objectives for which the funds were disbursed. I daresay that it would be unnecessary to state that many religious organisations and churches have also been directly or indirectly involved in these schemes.

If a business organisation can be prevented from employing the machinery of the corporate form to mastermind and execute fraud, why should a religious organisation not be so prevented? The Securities and Exchange Commission, (SEC), for instance, is constantly updating its rules to oppose and discourage all kinds of sharp practices by Capital market practitioners.

Now, a cursory look at the grounds upon which the Commission may remove a trustee as stated in Section 839(1) of the Act would reveal that such removal would be lawful where there is an allegation of misconduct, mismanagement, fraud and when such removal is necessary to ensure that the objects of the Association is met or to ensure that public interest is protected.

Even without the presence of these provisions in the Act, the Constitution of the Association usually contain provisions, which sanction these conducts, ascribing civil and sometimes criminal liability to erring trustees and which may result in the removal or replacement of the trustee. The codification of this position only reinforces its statutory teeth.

It is also necessary to mention that the regulation of incorporated associations and churches by government agencies is not peculiar to only Nigeria. The Charities (Protection and Social Investment) Act 2016 of the UK Sections 3 and 4 among others provides for the removal and replacement of a trustee upon satisfaction that such trustee is responsible for misconduct or mismanagement.

Finally, the CAMA 2020 by Section 839 (2) provides that the removal of a trustee requires a court order. This is a second layer of protection by way of judicial review aimed at preventing perceived highhandedness, witch-hunting or abuse by officials of the CAC.

A trustee aggrieved by the decision of the CAC may make a representation in Court before the Order for removal or replacement is made. This is certainly an improvement on the UK position in which the Charity Commission can remove and replace a trustee without recourse to any further authority.

While I sympathise with the apprehensions of the aggrieved churches owing to the peculiarities of our system, I do not agree that a law which seeks to sanction fraudulent and incompetent trustees is anything to be afraid of.

This law simply says ‘we won’t condone misconduct simply because you are not for profit’. If anything, it reinforces the trust of the members of the Association in the ability of the trustees to stay on the track of the objectives of the association.

Nevertheless, CAC, in carrying out this function ought to ensure that the process of investigation accords with the principles of natural justice, transparency and fair play to ensure that innocent trustees are not unjustly removed if the objectives of the Act is to be achieved.

Sat Aug 22 , 2020
553 By Disciples of Democracy.   The All Progressives Congress (APC) on Friday took steps to quench the anger of two of its strong pillars; Rochas Okorocha and Ibikunle Amosun who are immediate past governors of Imo and Ogun States respectively as well as serving senators. The party inaugurated Imo […] 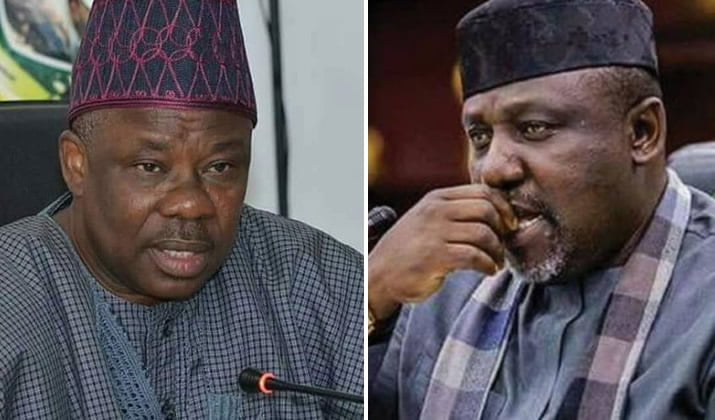