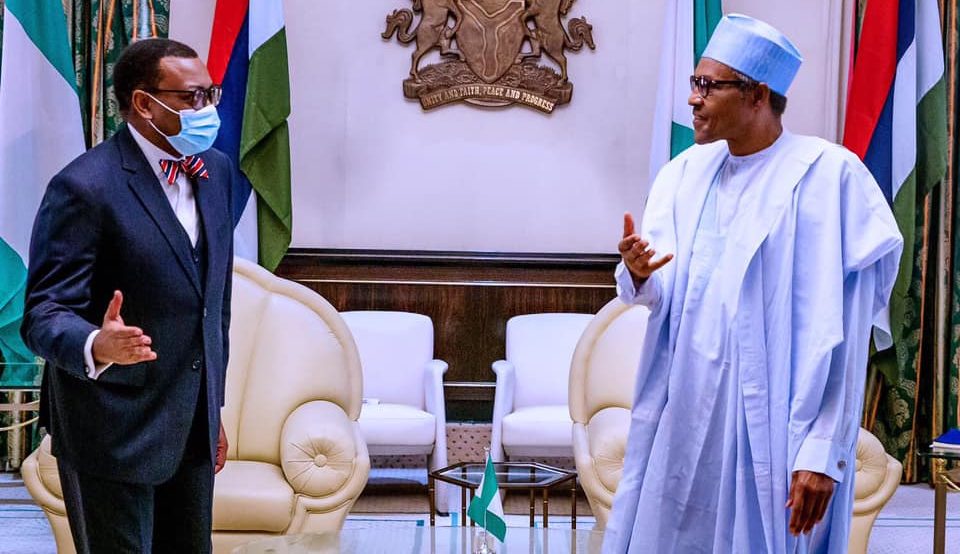 The strife is o’er, the battle done. But it was by no means easy. It took so much: tact, diplomacy, guts, deft footworks, prayers, yes, prayers, and so many other things. But today, we can noise it all around. Dr Akinwumi Adesina is now elected for another five-year term as President of African Development Bank (AfDB).

If America and some other world powers come after you, you have every right to shiver in the broiling sun. It’s like Chief Olusegun Obasanjo telling you to dismount from the horse of leadership in Nigeria. Only a Muhammadu Buhari can look him straight in the eyes, and say; No sir. And survive it.

Akinwumi Adesina fought the good fight for the AfDB diadem, won in brilliant fashion, and is already inaugurated for a second term in office. But it was not by a sudden flight. It took grit, guts and God.

How did President Buhari get the news of an Adesina victory in an election that we were very hopeful, but which nobody knew cocksure how it would go?

We were at the National Council of State meeting on August 27, 2020. Incidentally, it was the 35th anniversary of the military coup that ousted the then Major General Muhammadu Buhari from power as head of state. The man that struck in the palace coup was the Chief of Army Staff; Gen. Ibrahim Badamasi Babangida.

Babangida ruled for eight years, and left in less than glorious circumstances. Buhari, overthrown and detained for over three years, coasted back to victory as civilian President 30 years later.

That day, on the 35th anniversary of the coup, IBB, as he is generally known, was in virtual attendance at the National Council of State meeting from his home in Minna, Niger State. And Buhari was in the Council Chambers, at the Presidential Villa, as the country’s number one man. What was going through the minds of both men? Only God, the omniscient, would know.

“If you can look into the seeds of time, and say which grain will grow, and which will not. Speak then to me, who neither fears your favor nor your hate,” William Shakespeare had written in Macbeth. In 1985, when the putsch occurred, no one could look into the seeds of time, and declare that 35 years later, Buhari would be President, and Babangida would be attending a meeting with him as former leader. This world! It turns and turns in the widening gyre. May it always turn in our favor… Amen, somebody!

But we were talking about Dr Akinwumi Adesina, so let’s get back to our subject.

That meeting was in progress when Secretary to the Government of the Federation; Mr Boss Mustapha, made an interjection. He announced that voting had been concluded in the AfDB election going on in Abidjan, Cote D’Ivoire, and Nigeria’s Adesina had won by a landslide, getting 100% votes of regional members, and 100% votes of non-regional members of the Bank.

We first didn’t know how exactly to respond in such solemn meeting that had former leaders like Gen Yakubu Gowon, Ibrahim Babangida, Ernest Shonekan, Abdulsalami Abubakar, Goodluck Jonathan, many retired Chief Justices of the Federation, 34 of the 36 state governors, some serving Ministers, and many others in attendance. But President Buhari led the way. He broke the ice. He started clapping, applauding the election result all the way.

Others joined, and the applause lasted for a while. You could see the delight on all faces. The President had that smile that usually makes him winsome and youngish. And when the clapping quietened, he declared: “He deserves it.”

Yes, truly, Dr Adesina deserves it. He had served well in the first term. He had done Africa well, and Nigeria was proud of him. He deserved a second term without hassles. But plenty hassles they gave him, and plenty hassles he got.

As elections approached, America suddenly decided it didn’t want Adesina as President again. It told him to get off the horse. Different things began to happen.

First, some whistleblowers leveled 16 allegations of unethical practices against the AfDB President. A panel was set up to probe him. Adesina wrote his defense in 250 pages. Not a line of it was faulted, and he was exonerated by the Board of Governors of the Bank.

America kicked. It called for an independent, external party to look into the findings of the panel. It was done, and Adesina came forth shining as gold again.

In the middle of the battle, indeed, when it was at its fiercest, and the continent and the rest of the world were under lockdown due to the COVID-19 pandemic, President Buhari sent a presidential jet to fetch his illustrious citizen home.

That day, I was in attendance as Dr Adesina briefed the President. It was a full brief, with many different scenarios of how, why, when, where, painted. At the end, he asked for the support of his home country, as the election approached.

It was pin drop silence in the Diplomatic Room of the Presidential Villa as Buhari responded. He recalled that the election for first term had been on May 28, 2015, a day before he got inaugurated into office in his first term.

“You were a Minister under the government of People’s Democratic Party (PDP), and I am of the All Progressives Congress (APC), but I didn’t because of that withhold support from you. As President-elect, I had written all African Presidents to support you in the election, they did, and you won. I’ll remain consistent because no one has faulted the step I took on behalf of Nigeria.”

The President promised that Nigeria would stand behind Adesina, pull out all the stops and back his campaign, and pay all funds necessary to AfDB, to enable Nigeria become eligible for all legitimate votes due to her.

And on August 27, the chicken came home to roost. The 81 member countries who constitute the Bank returned Adesina, in what now goes into history as landmark in the 56 years history of the Bank.

Some Takeaways And Lessons To Learn From The Saga.

Ariwo ko ni music, empty barrels lo ma npariwo. Music is not noise. Empty barrels make the loudest noise. As President Buhari stood against the wishes of America on AfDB Presidency, you did not hear any noise, no gyrations, no paroxysm, no foul language.

He just stated what he would do, and he did. What an impressive, trustworthy man! His word is his bond. Let Buhari tell you something, and you can take it to the bank. You can sleep, and snore if you wish. No shaking.

Buhari stood by his citizen, because that one comported himself decently in the first place. If Adesina had peradventure been tainted with the slightest whiff of corruption or any other unethical act, would Buhari have supported him? Never.

This man of integrity would stand by all that is fair, just and decent at all times. He would stand for, and with all good Nigerians come hell or high waters. “This generation of Nigerians have no other country we can call our own. We must stay here, and salvage it together,” he had said long ago.

Again, always build a coalition for resounding victory. If forces led by America had been able to divide African countries, and pulled some other non-regional stakeholders along, it would have been difficult for Adesina.

But on the day he came, President Buhari had promised to reach out to all African leaders on his behalf. And the result was evident in the voting pattern. To win election in this country, particularly the Presidency, you need a broad coalition. That’s the way to go. Let our politicians imbibe this truth.

Also, refuse to be browbeaten. If Adesina was lily-liveried, the sheer weight of the opposition was enough to make him chicken out. When America sneezes, the rest of the world catches cold. And when it sneezes even now, what comes to your mind Is CORONAAAA, and you show a clean pair of heels. But Adesina stood his ground, backed by his President, the entire continent and some good people all around. No wonder it is said that the dog that is supported by a fearless hunter kills the monkey.

Many other lessons, but let’s identify just one more. Buhari is Muslim. Adesina is Christian. Buhari is Fulani. Adesina is Yoruba, an Ijebu man. But the fact that that they are both Nigerians is enough. Blessed be the ties that bind us. All those who trumpet and proclaim centrifugal, divisive sentiments should look for another business. This President has no time for them. He will do what is fair and just to you, irrespective of where you come from, your creed or religion. Though tribe and tongue may differ, in brotherhood we stand.

In his congratulatory statement to Adesina, President Buhari remembered to thank all who stood by Nigeria, in the continent and beyond. That’s the way to go. A grateful heart is divine. No wonder the AfDB President declared at his inauguration on September 1: “Today, a rainbow stretches from 81-member countries of the African Development Bank across the deep blue skies of Africa, with one message-the rain is gone. Gone are the dark clouds that held us down.”

True. I agree with Adesina. Just as I had agreed with reggae superstar, Jimmy Cliff, long ago:
I can see clearly now, the rain is gone,

I can see all obstacles in my way
Gone are the dark clouds that had me blind,

Bright days for Africa, for AfDB, for all people of goodwill across the world.

*Adesina is Special Adviser to President Buhari on Media and Publicity

HURIWA Wants Killers Of Protesters; Civilians Prosecuted Or They Will Be Prosecuted Soon In ICC 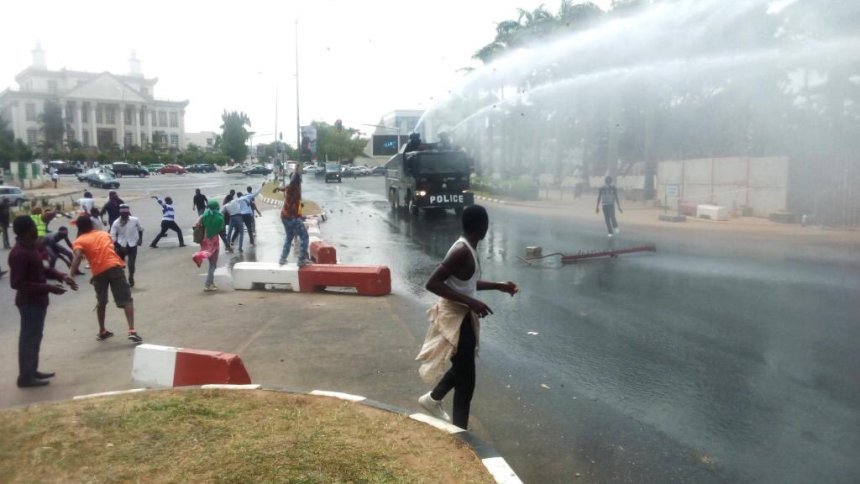