The number 46th President of the world’s super- power – the Unites States of America, Mr. Joe Biden of the Democratic Party has only just practically inaugurated his government’s foreign relations’ orientation with a landmark speech in which he announced the return of his country to a multilateral world away from Donald Trump’s America first ideology. He told the World that he will “narrowly focus on our mission on AL-Qaeda and ISIS”.

It is the firm belief of Mr. Biden that in the last four years of the administration of the number 45th President of the United States of America, the Republican billionaire President; Mr. Donald John Trump, the United States of America abdicated her global leadership role, and burnt many friendly bridges that hitherto existed with America’s traditional allies in Western Europe and beyond.

Of momentous interest to me from his speech is the pledge to re-establish the United States’ positive international role as a constructive force against global terrorism just as the administration of Joe Biden appears increasingly poised as reflecting the zeal and drive to advance the cause of democracy all across the World.

I will make a quick detour to look at what a professor of philosophy clearly stated that represents the essence of government in which case he highlighted the social contract role of government to safeguard lives and property of the citizens. Asking the question, what is the government for, this distinguished scholar wrote the following:

“James Madison, George Mason, and others assembled in Williamsburg in the spring of 1776 to begin drafting a constitution. The preamble to it said: Government is or ought to be instituted for the common benefit, protection, and security of the people, nation or community.”

He wrote also that: “Of all the various modes and forms of government, that is best which is capable of producing the greatest degree of happiness and safety and is most effectually secured against the danger of maladministration; and that when any government shall be found inadequate or contrary to these purposes, a majority of the community hath an indubitable, unalienable, and indefeasible right to reform, alter, or abolish it, in such manner as shall be judged most conducive to the public weal,”(The Good State: On the Principles of Democracy”, by Professor A.C. Grayling).

Back to our major point of view which is on the foreign policy blueprints unveiled by President Joe Biden in which he spoke to the issue of the place of the United States of America in the counter terror war around the globe.

He (Joe Biden) vowed to rebuild alliances because according to him, his assumption of office signifies that “America is back” in foreign policy.

CBS News reported that President Biden sought to reassert the United States as a world leader and boost morale among the ranks of the State Department in his inaugural foreign policy speech as president Thursday, vowing “America is back.”

“I will have your back,” Mr. Biden said during his address at the State Department. “This administration is going to empower you to do your jobs, not target or politicize you. We want a rigorous debate that brings all perspectives, that makes room for dissent. That’s how we’ll get the best possible policy outcomes. So with your help, the United States will again lead not just by the example of our power, but by the power of our example.”

The leading media in the USA also reported that Mr. Biden announced Defense Secretary Lloyd Austin is launching a global force posture review, during which there will be a freeze on the planned withdrawal of troops from Germany announced by the Trump administration. He also said there will be an end to American support for offensive operations in Yemen, including arms sales.

Mr. Biden told State Department employees he supports them and their work, comments that stand in contrast to former President Donald Trump’s criticisms.

“We must meet the new moment of accelerating global challenges, from the pandemic to the climate crisis, to nuclear proliferation, challenging the will only to be solved by nations working together and in common,” Mr. Biden said. “We can’t do it alone. We must start with diplomacy.”

The president reflected on his conversations with America’s closest allies — Canada, Mexico, the United Kingdom, Germany, NATO, Japan, South Korea and Australia — which were about “re-forming the habits of cooperation and rebuilding the muscle of democratic alliances that have atrophied over the past few years of neglect and I would argue abuse. American alliances are our greatest asset.”

“The main message that I want to communicate to you all is whether you’re part of the newest class of foreign service officers or you’ve worked for decades in the civil service or foreign service, or you’re locally employed staff, you’re vital, and success to the strength of our nation depends in no small part on you,” he said.

I listened attentively to President Biden’s inaugural foreign policy speech to hear if West Africa means anything to his administration especially given the danger that Islamic terrorists pose to the lives and property of hundreds of millions of West Africans.

Nigeria is obviously the hot bed of Islamic terrorism since the last one decade that boko haram terrorists launched series of attacks and bumbling campaigns.

Only few days back, the French spy boss raised an alarm that the Islamic terrorists have concluded all arrangements to expand their scope of attacks to such other Nations like Benin Republic and Cote d’ Ivoire.

With this credible alert, it is therefore not out of place to hazard a guess that Biden may look into how his administration can provide technical assistance to the counter terror strategies adopted by the West African Nations like Nigeria, Niger Chad, Cameroon and Mali.

Recall that France’s top spy chief warned this week that militant jihadist groups in the Sahel are pursuing expansion into the Golf of Guinea, with a focus on Cote d’Ivoire and Benin. In a rare public appearance, Bernard Emié, head of the General Directorate for External Security (DGSE) revealed intelligence purportedly showing a meeting between top al-Qaeda in the Islamic Maghreb commanders.

“The agenda of this meeting was the preparation of a series of large scale attacks against military bases,” said Emié during a speech on Monday alongside Defence Minister Florence Parly at the d’Orléans-Bricy airbase. This is where leaders of al-Qaeda in the Islamic Maghreb (AQIM) devised their expansion plans for the countries of the Gulf of Guinea,” he added.

A leading French media reminds us that Cote d’Ivoire suffered an attack in 2016 when three gunmen opened fire at a beach resort in Grand-Bassam killing 19 people.

Benin the French media says was the scene of an attack against a police station in February 2020, and the kidnapping of two French tourists and a local guide from Pendjari National Park in May 2019.

Emié’s appearance in public, as well as presentation involving intelligence the spy agency had gathered, was somewhat rare.

He spoke of successes he said the French authorities had achieved in the Sahel, as well as in Iraq and Syria. In Mali, he referred to two main groups who pose a threat – AQIM and Islamic State in the Greater Sahara.

www.rfi.fr reports that Sahelian countries serve as a base from which hardline groups, made up of foreign fighters, can use to plot attacks against Europe, according to the spy boss, describing several hundred combatants using motorbike and pickups.

It is a welcome development therefore that the alarm from France coincided with the foreign policy speech by Biden. From his campaign websites, we read that “Joe Biden laid out his foreign policy vision for America to restore dignified leadership at home and respected leadership on the world stage.

Arguing that our policies at home and abroad are deeply connected, Joe Biden announced that, as president, he will advance the security, prosperity, and values of the United States by taking immediate steps to renew our own democracy and alliances, protect our economic future, and once more place America at the head of the table, leading the world to address the most urgent global challenges”.

He had also pledged that in a Biden administration, America will lead by example and rally the world to meet our common challenges that no one nation can face on its own, from climate change to nuclear proliferation, from great power aggression to transnational terrorism, from cyberwarfare to mass migration.

In a speech at The Graduate Center at CUNY in New York, Joe Biden laid out his blueprint to repair the damage allegedly wrought by President Trump and chart a fundamentally different course for American foreign policy for the world as we find it today—and as we anticipate it will be tomorrow. Biden will continue to build on this vision over the course of the campaign.

Nigeria and West Africa need to escalate the war on terror with determination and commitments and hope that the Joe Biden’s administration will provide the needed leadership in the global war on terror. Sadly,  the practice of releasing Boko haram terrorists back into the society after they are caught by the Army needs to stop.

Biden should ask President Muhammadu Buhari the hard question of why the government has yet to arrest the sponsors of terrorists in Nigeria and how come the Central bank of Nigeria could crack down on sponsors of peaceful protests against police excessive deployment of force and brutality otherwise known as ENDSARS protests but has not shut down the banking accounts of sponsors of Boko haram terrorists and other armed non state actors.

As Talent Hunt With SoSo B gets Bigger and Better…

Mon Feb 8 , 2021
544 By The World Satellite.   As part of its drive to continue to engage, showcase and reward young creative people in Nigeria, SoSo B Empire; a General Contracts, Entertainment, Publicist and Image Management Company has kicked off auditions for the second edition of Talent Hunt With SoSo B. Speaking […] 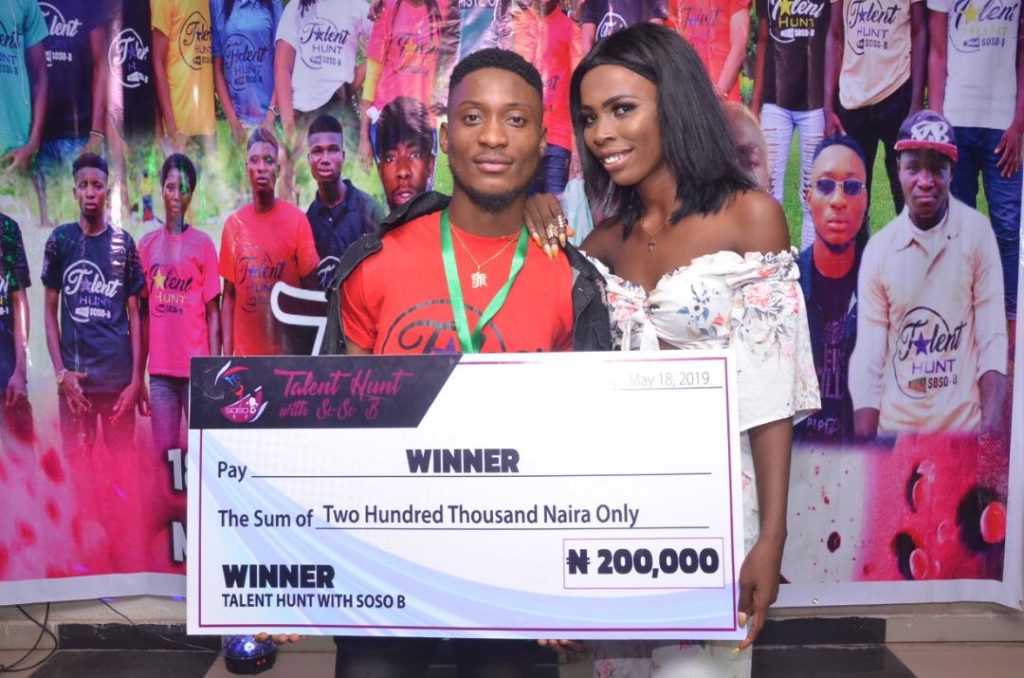