HURIWA said the unilateral and arbitrary deployment of airpower by President Muhammadu Buhari against South East of Nigeria even when the Indigenous peoples of Biafra (IPOB) and the Eastern Security Network had reportedly asked their members to disengage from their activities,  constituted a crime of military aggression against innocent civilians just as the Rights group stated that the airstrikes have created an atmosphere of fear and a climate of uncertainty in the entire Imo State with millions of people unsure of their safetybany longer.

Besides,  HUMAN RIGHTS WRITERS ASSOCIATION OF NIGERIA (HURIWA) which described the death of the Chief of Army Staff Lieutenant General Ibrahim Attahiru and other officers in a military plane crash as regrettably avoidable and tragic, has tasked the yet to be named successor to the office of the Chief of Army Staff in Nigeria to be mindful of the inherent human rights of Citizens recognized by law.

HURIWA lamented that human rights  violations by the soldiers during internal military operations which became unprecedented in the past few weeks in the South East of Nigeria have started portraying the Nigerian Army in bad light around the World with the concomitant use of extralegal killings of civil by the soldiers.

The charge on the new Chief of Army Staff to compel soldiers to comply by rules of engagement and adhere strictly to the human rights provisions enshrined in the Grundnorm was because according to the Rights group, the notoriety of the military Under the short spell of time that the late Lieutenant General Ibrahim Attahiru spent constituted global opprobrium and was reprehensible.

HURIWA said mainstreaming respect for the fundamental human rights of civilians by Military personnel in all internal security operations was imperative, also called for a total audit of the military aviation sector going by the frequent Air accidents that have happened in quick succession. The Rights group said the directive by President Buhari to the military to wage aggressive attacks against locations in the South East of Nigeria without provocation may lead to a genocide which the Rights group is appealing to World leaders to intervene now before it becomes too late.

The Civil Rights Advocacy Group stated that an indigene of the area reortedly said, “There is an ongoing military airstrike in Odenkwume and Amuzi communities in Obowo and their neighbouring communities in Ihitte/Uboma LGA.”They have continued to attack the communities in search of gunmen suspected to be ESN (Eastern Security Network) members, thereby putting the people of the area in fear. “Just a few minutes ago, I got a call from my brother and other family members to inform me of what is going on in my community. There is a heavy downpour now that a temporarily suspended airstrike continued in Odenkwume Odenkwume.”

In a media statement by the National Coordinator Comrade Emmanuel Onwubiko and the National Media Affairs Director Miss Zainab Yusuf,  HURIWA said the continuous deployment of military force will rather than solve the current security challenges in the South East of Nigeria and South South with specific reference to the unwarranted attacks targeting police formations and operatives by unknown gunmen,  will increase since most people will assume that President Muhammadu Buhari has declared a unilateral and illegal warfare against the law abiding citizens of South East of Nigeria.  HURIWA has therefore asked the government to stop these unlawful airstrikes before they lead to loss of innocent lives of villagers who now live in a state of fear and a climate of panic.

Mon May 24 , 2021
677 By TRWC Consult.   Njideka Udochi M.D., M.P.H., F.A.A.F.P., a Nigerian-born medical doctor practicing in the US and younger sister to the current WTO DG, Dr. Ngozi Okonjo-Iweala, has received a major award for Covid-19 Community Engagement and Response in Howard County, Maryland, USA. The award, which is worth a whopping $65,000, […] 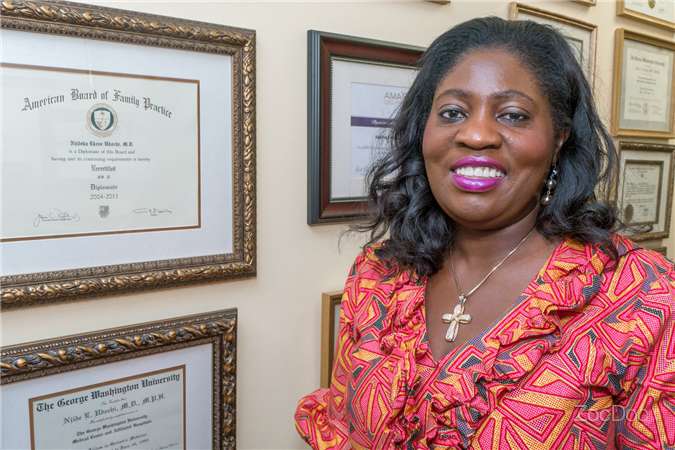