The foremost and leading Civil Rights Group; Human Rights Writers Association of Nigeria (HURIWA) has raised objections over the reported confirmation by the Ebonyi State Governor; David Umahi on the killing of the five engineers working at the Onu-Nwenewo; an Ezza village of Effium community in Ohaukwu Local Government Area of the state, who were abducted on Wednesday, November 03, 2021 while on an Assignment to supervise Abakiliki Ring Road project.

HURIWA faulted the announcement by the Ebonyi State Governor Ebonyi State Governor David Umahi who in a press briefing on November 29th 2021 reportedly confirmed the abduction and killing of contractors and policemen working in the Effium Community in Ohaukwu Local Government Area of the state.

“He the Governor said he has also sacked two development centre coordinators of Effium community. The governor disclosed this during a security meeting organised by the state’s founding fathers led by Chief Martin’s Elechi former Governor of Ebonyi, Christian Association of Nigeria among others. The governor made this so called revelation without reaching out to the families of the ADB Engineers just as the Wives of the missing told HURIWA in Enugu that the governor did not notify them and till date he the Governor has not demonstrated any believable steps to prove that indeed their breadwinners are dead because the Governor has neither produced the so called killers nor the alleged burial sites which makes the announcement curious and suspicious given the antecedents and encounters between the chief consultants who also disappeared and the Ebonyi State Governor as disclosed to HURIWA by his Wife”.

Huriwa has therefore asked President Muhammedu Buhari to compel the Ebonyi state Governor to provide the missing engineers alive because, although governor was aware the disappearance, he allegedly instigated another company to replace the original consultants ~NELAN Consultants.

Huriwa also reminded the president on the necessity for compelling the production of the disappeared engineers by the Governor because the Ebonyi state Governor has done little or nothing to activate mechanisms to ascertain what happened To ADB consultants in Ebonyi state.

Besides the Rights group stated that in a letter it sighted sent to the country Representative of African Development Bank Group, NELAN consultants made the following observations which form the basis for the Ebonyi state Governor to render transparent account of what happened to the missing Engineers.

NELAN consultants stated as follows: “We are constrained to inform you that, seven (7) days after the ugly incident of the abduction of our engineers from the construction site, the Ebonyi State Government (hereinafter, “The Government”) through Engr. Felix Ottah communicated us in writing showing their displeasure that we are absent from the construction site, and that our absence amounts to a gross negligence of duty; “Upon the receipt of their letter dated 10” November, 2021 we promptly reacted on the 11th day of November, 2021. (The Government’s letter dated 10th November, 2021 and our response of 11th November, 2021). It is important we make reference to the fact that as at the 10th day of November, 2021 when we received letter of complainant from the Government, the official date of the take-off of the project is yet to mature.”

HURIWA recalled the Engineering firm told African Development Bank thus: “The Government’s remarkable ineptitude towards the unfortunate occurrence of 3rd day of November, 2021 got heightened when we were invited for a meeting involving representatives of African Development Bank and Islamic Bank, which the agenda of the meeting was not clearly stated, and as a result of our other engagements with the security operatives regarding our ordeal, we declined to attend the meeting and suggested a deferment. To our greatest shock, someone unknown to us, who is not our staff, on the instructions of yet to be identified people appeared in that meeting, presented himself as our staff, duly authorized to represent NELAN CONSULTANTS. This is allegedly fraudulent in nature and also a crime of impersonation. We shall in due course demand the full identity of the impersonator. It is a further show of desperation on the part of the Government whose only concern is all about the project, in total disregard of the plight of the five (5) families whose wards are the unfortunate victims of the abduction, and also that of the consultants as a company.”

HURIWA expressed this in a statement jointly signed by the National Coordinator; Comrade Emmanuel Onwubiko and National Media Affairs Director; Zainab Yusuf wherein the rights group underlined the insinuations in the encounters between the missing engineers and the governor.

Perceiving a reasonable suspicion that the five missing engineers may have been forced to disappear by a yet to be ascertained individual owing to the fact that the Governor only declared them dead and buried without consulting the families and yet failed to produced the burial sites, HURIWA demanded the immediate release of the victims alive.

Substantiating this call, HURIWA recalled that the five engineers identified as Nelson Onyemeh (Director and Partner of Nelan Consultants), Stanley Nwazulum, Ernest Edeani, IK Ejiofor and Samuel Aneke were on November 3, 2021 deployed to a road project at Effium in Ebonyi state in continuation of routine supervisory works.

“According to reports, Mr. Nelson, who was to hold a meeting with one Ken Okeh at 3pm on that 3rd of November, 2021 after the site visit to discuss some accommodation Issues had travelled together with the other four victims from Enugu to Effium with the project vehicle; Toyota Hilux with registration number ERR 001 EB and had arrived Effium about 2pm ahead of the scheduled meeting.

“On arrival, the team allegedly called Okeh and announced their arrival at the site to him. The call put to Okeh was reported to be the last heard from them till date and spirited efforts made by the firm, families and friends of the victims have yielded no fruit as their respective phones remained switched off. No word has been heard of them till date and the vehicle they travelled with has not been seen anywhere,” HURIWA recounted.

Continuing, the Rights Group informed that the Abakiliki Ring Road is a USD$15O million project, being financed by African Development Bank, which the Governor of Ebonyi State; His Excellency, Governor David Umahi Nweze had commissioned the second phase of the Project on Wednesday, October 06, 2021.

More so, HURIWA informed that Nelan Consultants was appointed by the African Development Bank (AfDB) to supervise the Abakaliki Ring Road Project. “They are responsible in ensuring that the standard of the road construction comply with the approved design, drawings, specifications, Terms of contract and global acceptable sound engineering practice”.

“However, in a text of a media briefing titled: “The Disappearance Of Five AfDB Consulting Engineers in Ebonyi State The Untold Story”, the wife of Engineer Nelson Onyemeh; one of the missing Engineers and lead consultant on the Abakiliki Ring Road project supervision testified that her husband had on November 2, 2021 debriefed her on the challenges posed by alleged unending interferences and threats from Governor David Umahi Nweze.

Again, HURIWA referenced Engr. Benjie Ezeagwu, who in a letter to The Country Representative of African Development Bank Group, dated 6th December, 2021 and titled “The Construction Of Ebonyi Ring Road Project And The Abduction Of Five (5) Resident Engineers Of Nelan Consultants At The Project Site, Effium, Ohaukwu L.G.A, Ebonyi State” had accused the Ebonyi State Government of remarkable ineptitude towards the unfortunate occurrence of 3rd day of November, 2021.

“Egnr. Ezeagwu in his letter further collaborated the claims of Mrs. Onyemeh, asserting that ever since the project started, the company; NELAN CONSULTANTS represented by Engr. Nelson Onyemeh have been encountering certain issues ranging from unpleasant interference, non-professional approach and unconducive work-atmosphere with the Governor himself, which the said issues were clearly unaccommodated within the contract stipulations”.

Thus, from the actions and inactions of the Government since the 3 of November, 2021 as voiced by both Mr. Ezeagwu and the wife of Mr. Nelson Onyemeh, coupled with the fact that till date, the families of the abductees are yet to be formally notified of their death and where they were buried, HURIWA established no empathy, lack of concern and laissez-faire attitude. “The Government’s attitude towards the ordeal of Nelan Consultants has left us with no other option than to conclude that there may be ulterior motive behind the scene.

“The release of the bruised and emotionally destabilizing news about the alleged death of the five engineers by the Governor during a security summit organized by Christian Association of Nigeria, Abakiliki chapter has left their families, friends and associates emotionally confused.

“We were in expectation and are still in high expectation that it is the sole and primary responsibility of the government to throw their weight behind the plight the families and friends of these victims so as to unravel the entire circumstances surrounding this unfortunate incident and most importantly rescue them alive and unharmed”, HURIWA re-emphasized.

HURIWA concluded by appealing to the President Muhammadu Buhari to order the Inspector General of Police; Usman Alkali Baba to use his office to order search and rescue of the victims. The President should also instruct the Director General of Department of State Services to activate investigative mechanisms to rescue these missing engineers in Ebonyi State.

As Orji  Kalu Echoes  From North

Thu Dec 9 , 2021
404 By Emmanuel Onwubiko.    Campaigns by different groups from all over the country for political succession in 2023 of the presidency- The highest political position in the Africa, have intensified. Multi sectoral and multi dimensional campaigning platforms are springing up in their numbers just as Northern Nigeria seems to […] 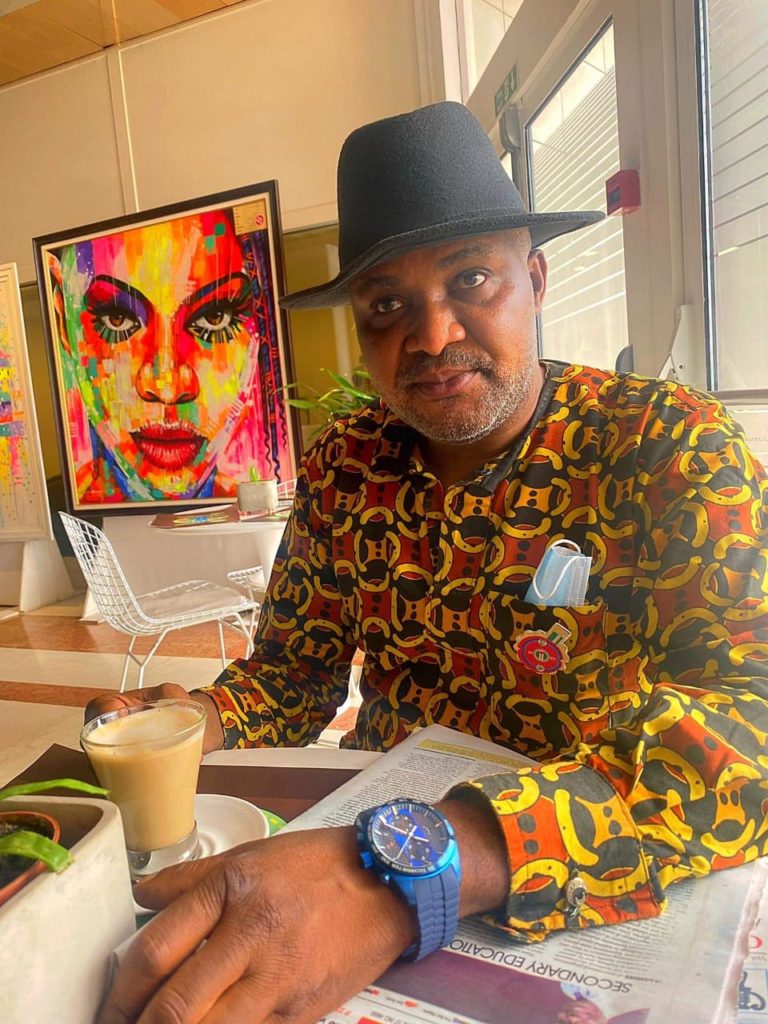