TEXT OF A MEDIA BRIEFING BY THE FOREMOST AND LEADING CIVIL RIGHTS ADVOCACY GROUP; HUMAN RIGHTS WRITERS ASSOCIATION OF NIGERIA (HURIWA) ON THE KILLINGS IN BENUE STATE OF NIGERIA SINCE 2015 IN COMMEMORATION OF THE 2021 WORLD HUMAN RIGHTS DAY.

Gentlemen of the Fourth Estate of the Realm, we humbly welcome you all to this media briefing organised in commemoration of the World Human Rights Day, 2021 by the prominent Civil Rights Advocacy group; HUMAN RIGHTS WRITERS ASSOCIATION OF NIGERIA (HURIWA).

As you all may be aware, Human Rights Day is observed every year on 10 December — the day the United Nations General Assembly adopted, in 1948, the Universal Declaration of Human Rights.

The theme for this year, is Reducing Inequalities and Advancing Human Rights. It relates to ‘Equality’ and Article 1 of UDHR, which says ‘All human beings are born free and equal in dignity and rights.’ The principles of equality and non-discrimination are at the heart of human rights.

However, HURIWA has chosen to apply the theme practically and in our context by reflecting on the series of killings by armed Fulani herders with special focus on Benue state of Nigeria.

This is completely our independent initiative in our capacity as a team of professionals who have no political affiliations but have come together to advance the single agenda of building a formidable and economically strong united Nigeria in addition to achieving just and equitable development in our dear country.

Why the interest in Benue state? You may ask! For the avoidance of doubt, we wish to stress here that we are interested in what is happening not only in Benue but also in Nasarawa, Plateau, Niger, Kogi, Taraba, Adamawa and, indeed, all other states of the Middle Belt, South-South, South-East, South-West, North-West and the North-East where these mindless Fulani militia has visited its terror on peaceful and defenseless communities leaving in its trail blood and devastation.

From verifiable evidence, it may take international pressure to dissuade the central government from going ahead with its entrenched active support for Fulani terrorists going by public utterances of key officials of the current administration in Abuja, which appear apparently to be heavily sympathetic to Islamist and Fulani terrorists.

For instance, it would be recalled that HURIWA had in a letter dated August 13, 2020 and signed by its National Coordinator, Emmanuel Onwubiko, asked the Attorney General of Federation and Minister for Justice to prosecute “armed Fulani killers.”

However, the minister in his reply dated October 7, 2020 claimed the cases in question had no case files and as such he could not prosecute them.

Though herdsmen’s incursions into Benue date back to 2012, the crisis got to a head in early 2016 when militant herdsmen stormed Agatu local government area, killing close to 2,000 persons in what many, including the United Nations, described as genocide.

Regrettably, since the advent of the present administration, despite concerted efforts to check the escalating crisis, the state has recorded many incursions of herdsmen across Benue communities, and, from Agatu to Makurdi, Guma to Logo, Buruku to Tarka, and Gwer West to Otukpo, it has been tales of sorrow, tears and blood for local farmers who lost loved ones and property.

While the crisis and killings raged, Ortom and his Nasarawa State counterpart, Tanko Al-Makura, held several meetings to check the invasion of Benue from the neighboring state which culminated in the signing of a peace agreement after the Agatu massacre in early 2016.

All the peace efforts seemingly failed and the embattled communities were left with no choice but to pressure the Ortom government to enact the law prohibiting open grazing in order to put an end to the killings.

Then, in 2017, the government came up with a bill to prohibit open grazing in Benue. The said bill, which was subjected to public scrutiny and inputs by the people through public hearings and debates from stakeholders across the state, including herdsmen, was passed and signed into law, though a six month window period was allowed for sensitization and advocacy before the law came into full effect on November 1, 2017.

Nonetheless before the law came into effect, the Miyetti Allah Kautal Hore had registered its opposition to the law, insisting that it was intended to frustrate the trade of herdsmen in the state.

The group was alleged to have threatened to resist the law and invade Benue to express its resentment and even went as far as dragging the state government to court over the matter.

Bothered by the threat, the Benue government appealed to the Federal Government to arrest the leaders of the group and prosecute them.

Aside the state government, the leadership of the three major ethnic groups in the state, under the aegis of the Mdzough U Tiv, the Idoma National Forum and Omi’Yi Igede, and through Chief Edward Ujege, appealed to the Federal Government to call the Miyetti Allah group to order.

Whereas the Federal Government took the alarm raised by the people of the state for granted, the unimaginable happened: Women, including the pregnant, children and unarmed men and youths were slaughtered in two days of coordinated attacks that started on new year’s day of 2018 in Logo and Guma local government areas.

Since then, Benue has been turned into a theatre of war; 21 out of the 23 LGAs of Benue State have suffered one form of herders’ attacks or the other. Between January, 2018, and now, armed herdsmen have reportedly killed about 1,773 people (those traced and accounted for) in Benue State. The killers obviously no longer come with cows, but AK47.

Most significant was on the 24th of April, 2018 when armed Fulani herdsmen unleashed terror on Ayar Mbalom community in the Gwer East Local Government Area of Benue State, killing 19 persons, including two Rev. Fathers identified as Fr. Joseph Gor and Felix Tyolaha.

It was gathered that the Catholic faithful had gone for morning mass around 5.30am and unknown to them, the militia herdsmen had laid ambush in the community.

The latest of the callous and inhuman atrocities came in the morning of November 13, 2021, when some gunmen invaded a community in Mbayatyo, Mbater council ward of Logo LGA killing scores of mourners at a wake for one of their departed relatives. What could be worse than the killing of bereaved people mourning the death of a loved one?

HURIWA is mostly concerned because the mass killings perpetrated by the Fulani herdsmen is a violation of right to life. The sanctity of life is guaranteed under section 33(1) of the Constitution of Nigeria 1999 (as amended), which provides: ‘Every person has a right to life, and no one shall be deprived intentionally of his life, save in execution of the sentence of a court in respect of a criminal offence of which he has been found guilty in Nigeria’.

Similar provisions can be found in Article 3 of the Universal Declaration on Human Rights (UDHR) 1948, Article 6 of the International Covenant on Civil and Political Rights 1966,59 and Article 4 of the African Charter on Human and peoples’ Rights (Ratification and Enforcement) Act 1983.

Importantly, the 1983 Act is a domestication of the African Charter on Human and Peoples’ Rights 1981 in Nigeria. More importantly, Nigeria is a State Party to these international/regional instruments and their provisions are binding on the country.

In effect, the right to life of a Nigerian citizen as well as those within the territory of Nigeria is derived from multiple sources, including the Nigerian Constitution. There is no question that the victims of the Fulani herdsmen killings have a right to life under the above legal provisions.

There is no doubt also that the various killings of innocent people by Fulani herdsmen violate not only the Nigerian Constitution but also opens them up for criminal liabilities/charges for multiple murders under the Criminal Code Act/Law or Penal Code Act/Law depending on whether the crime was committed in southern or northern Nigeria respectively. Why then has government not been able to prosecute any of them?

Again, the recurrent killings of innocent persons across Nigeria by the Fulani herdsmen, their attacks on communities/villages and their kidnapping activities are all within the purview of the Terrorism (Prevention) Act 2011 (as amended). Yet, the federal government has not arrested and prosecuted any of the perpetrators; nor has she declared the Fulani herdsmen and/or their organizations such as Miyetti Allah as a terrorist organization as required by the law.

It is strongly recommended that affected individuals and states of the federation should follow the example of Benue State by pursuing possible civil actions against the Fulani herdsmen. Noteworthy, criminal prosecutions and civil actions would help to curb the recurrent Fulani herdsmen attacks.

In the long term, the federal government must adopt critical policy decision (s) in collaboration with all the states of the federation and other critical stakeholders that could end the recurrent killings and other criminalities.

In view of this, we berate a former two-term governor of Benue State and Minister of Special Duties and Intergovernmental Affairs; George Akume for attacking Benue State Governor, Samuel Ortom on his position of insecurity in the state and nation at large.

Akume had at a press conference on Monday, August 30, 2021 asked Ortom to tender an unreserved apology to President Muhammadu Buhari for using foul language when he called on him to address the security challenges ravaging the country.

It is so awkward that instead of using his good office and closeness to President Muhammadu Buhari to tell Mr. President the naked truth about the atrocities being perpetrated by invading Fulani herdsmen militia against the Benue people, he rather chose to play the role of an errand boy desperate to change the narrative and misinform or mislead the Nigerian people on the true situation on the ground.

Nothing can be more unfortunate and pathetic than a situation where a man who is looked up to by the Benue people as a father and patriot allegedly choses to stoop so low in alleged defense and promotion of a well-orchestrated agenda of Fulanisation, which will ultimately consume everybody, including himself, if not checkmated. Minister George Akume needs to be courageous enough to speak for his good people of Benue State who have given all that he attained as a politician. Without Benue people, there will be no politically relevant George Akume

HURIWA hereby throws her weight behind Governor Ortom. This is because Nigeria would have known peace if many governors were shouting against terror attacks by Fulani assailants and their sponsors.

More so, if every governor had remained resolutely committed in providing security and wellbeing of their citizens as Governor Ortom and a few other governors are doing, the present security challenges would have been a thing of the past.

We call on President Buhari to heed to the voice of reason by Governor Ortom and other governors that have raised concerns on the present dangers facing the Nigerian state occasioned by the atrocious activities of these Fulani herdsmen invaders.

The President can still redeem his good name by supporting and partnering with state governors and other leaders who have seen existential threats posed by these attackers in order to stave off the imminent disintegration of the country under his watch.

Sun Dec 12 , 2021
219 Our Reporter.   Recognizing that good governance and human rights are mutually reinforcing as Human rights standards and principles provide a set of values to guide the work of governments and other political and social actors, the foremost and leading Civil Rights Advocacy Group; Human Rights Writers Association of […] 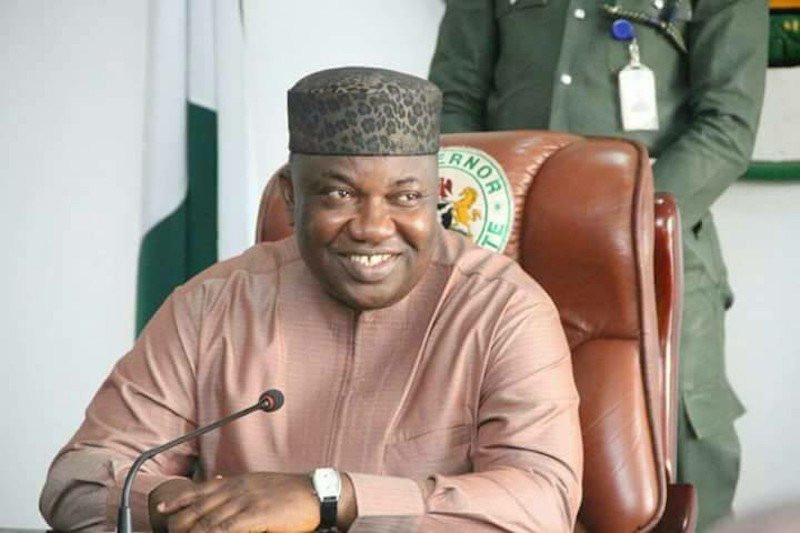