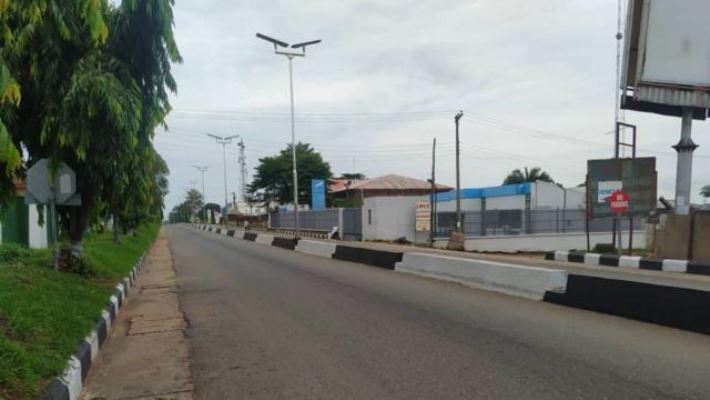 Provoked by the anxiety brewing in the south eastern region of Nigeria over the controversies in the sit-at-home order in solidarity with leader of the now proscribed Indigenous Peoples of Biafra (IPOV) Mazi Nnamdi Kanu, coupled with the economic distabilising tendencies it has induced, the foremost Civil Rights advocacy group; HUMAN RIGHTS WRITERS ASSOCIATION OF NIGERIA(HURIWA) has harped on the need to immediately put to an end to all forms of economic self-extermination programmes by groups in the South East.

HURIWA in a statement signed by the National Coordinator; Comrade Emmanuel Onwubiko and the National Media Adviser; Miss Zainab Yusuf condemned the economic destabilisation and the constant paralysis of commercial and public activities in the South East on Mondays and any other day whatsoever whether sanctioned or not by the Indigenous People of Biafra, which has been the norm since Mazi Nnamdi Kanu was arrested in Kenya and brought back to Abuja to face trial.

HURIWA asserted that it is sad that Igbo Youths have capitulated to the temptation by President Muhammadu Buhari to instigate the demolition of the economy of South East of Nigeria by the Federal Government’s deliberate dehumanisation of Mazi Nnamdi Kanu,  waging of destructive military led actions against South East of Nigeria just as HURIWA said it amounts to self-inflicted ECONOMIC SABOTAGE OF THE SOUTH EAST REGION for IPOB and other groups to use the force of arms and violence to force traders, teachers, students, artisans, farmers, and public servants to stay at home at huge and negative costs to their economic wellbeing.

“In response to Kanu’s extraordinary rendition, IPOB had declared a sit-at-home every Monday in protest. The group assumed the sit-at-home would continue until Kanu regains freedom. However, IPOB had had to cancel the sit-at-home, with a caveat that it would only be observed on days Kanu appears in court. Despite this, the South East is shut down every Monday, as people stay at home out of fear and anxiety”, HURIWA explained.

HURIWA challenged IPOB and residents of SOUTH EAST to rein in the extremist using violence to enforce these illegal SIT-AT-HOME ORDERS which even the mainstream IPOB had denied making that Order for Mondays sit-at-home.

HURIWA further recounted that from June 29, when Kanu was taken to court in Abuja, after being forcefully brought back to the country, the South East has been shut down several times in observance of the sit-at-home order while adding that on those days, the South East suffered economic and social losses whose magnitude may not rightly be quantified but run into over N700 billion since June last year.

“The fact is that the South East is draining and its economy dying away as a result of the sit-at-home order. When markets, banks, supermarkets, schools and others are locked down on days they are supposed to be open, money is lost. When commercial vehicles are forced not to operate, money is lost and people’s sources of livelihood are affected. Residents have moved their businesses to places outside of South East thereby impoverishment the populace.

“Beyond this, when schools are shut, South East students and pupils lose out as their counterparts in other geopolitical zones in the country are at school. At this rate, the South East is gradually dying.

“By forcing people to stay at home their businesses and sources of income are indirectly being frozen. Therefore, the South East loses billions of naira everyday people are forced to stay at home. Apart from the question of morality, this does not, in any way, affect the Federal Government or President Buhari, who are supposed to be the targets”, HURIWA lamented.

Canvassing the adoption of other proactive advocacy measures such  as increased media advocacy and instituting legal matters in and out of Nigeria to challenge the human rights abuses against peaceful agitators of self-determination including but not limited to Mazi Nnamdi Kanu, Sunday Igboho and other self determination crusaders, HURIWA emphasized that Sit-at-home, no matter the good intention those sustaining it claim it is meant for, is destroying the South East, which by providence and dint of hard work rose from the ashes of the civil war to become an economic power house reckoned with in Nigeria and the West Coast.

“Even in the face of suppression and political disregard, the South East’s economy looked good, with an impressive per capita income. Taking actions that would reverse this trend would amount to the South East shooting itself in the foot. The people living in the South East and the companies and organisations in the zone are the ones suffering. At a time of economic hardship, people are forced not to go to their business to eke out a living”, HURIWA cautioned.

Relatedly, the rights group frowned at the new terrorism charges against the embattled leader of the Indigenous People of Biafra (IPOB) Nnamdi Kanu, which the federal government filed almost 24 hours to the scheduled commencement of his trial by Justice Binta Nyako, citing that the 15 amended charge is just a calculated attempt to delay the trial and have an excuse to further incarcerate Mazi Nnnamdi Kanu in the solitary confinement.

According to HURIWA, Mazi Nnamdi Kanu who was formally facing a seven-count treasonable felony charge, will now have to enter his new plea to a 15-count amended charge marked FHC/ABJ/CR/383/2015, which was signed by the Director of Public Prosecution, DPP, M. B. Abubakar.

“It would be recalled that in October last year, the government had filed an amended seven-count against the detained IPOB leader, charges which bordered on treasonable felony and his alleged involvement in acts of terrorism at the same court.

“Justice Binta Nyako, who was to preside over the case, later fixed Tuesday, January 18, to hear some pending applications, including the one Kanu filed to be discharged and acquitted.

“Barely a day to the scheduled commencement of the accelerated hearing, the government, in the amended process it filed before the court, increased the counts in the previous charge it preferred against the detained IPOB leader.

“For the Federal Government to wait till almost 24 hours to the scheduled commencement of his trial is an indication that IPOB’s Strategy of strangulating South East economy is what the Presidency wants, which is why they keep filing frivolous and vexatious charges to delay and frustrate rapid hearing of the pending matter.

“If the sit-at-home, destroys the economy of the South East, the region would lose relevance in Nigeria completely. Observably, it is because of economic power that other zones in Nigeria still respect, fear and listen to the South East and Southeasterners. Without it, the South East would amount to nothing”, HURIWA revealed.

Moreover, HURIWA stated, that the continued fear over the observance of the sit-at-home in the South East, is a result of the failure of government in the region just as it noted that when a people would rather obey IPOB or indeed people who have allegedly hijacked the sit-at-home, instead of elected governors, it is a clear vote of no confidence.

“Power and authority, which should reside with governors, have been seized by IPOB in the South East. The bitter truth is that Southeasterners obey IPOB, instead of governors and state governments. Now, residents of the region fear IPOB and don’t respect the state governments. This can explain why the sit-at-home continues”.

Restating its call for the immediate and unconditional release of Mazi Nnamdi Kanu from illegal detention by the Federal Government, HURIWA charged IPOB to reexamine itself, cautioning that if the group had cancelled the sit-at-home it ordered and people still observe it because some elements outside the authority of IPOB are enforcing it, shows that the group is losing control and the best bet is for IPOB to deal with such rebellious elements within or outside her fold.

Government As Purveyors Of Fake News:

Tue Jan 18 , 2022
126 Government As Purveyors Of Fake News: By Emmanuel Onwubiko.   “A few lines of reasoning’s can change the way see the World”. -Steven E. Landsburg. I was actually ruminating on a very important theme that traverses all of humanity and indeed already indulged in my compulsive lifestyle of deeply […] 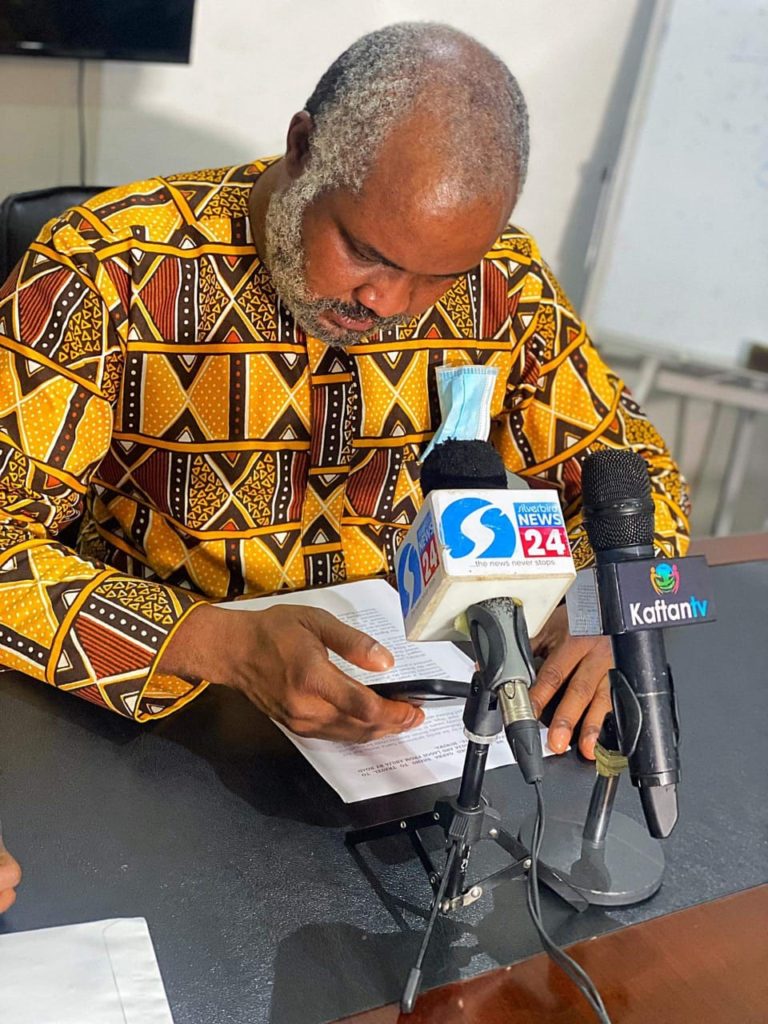