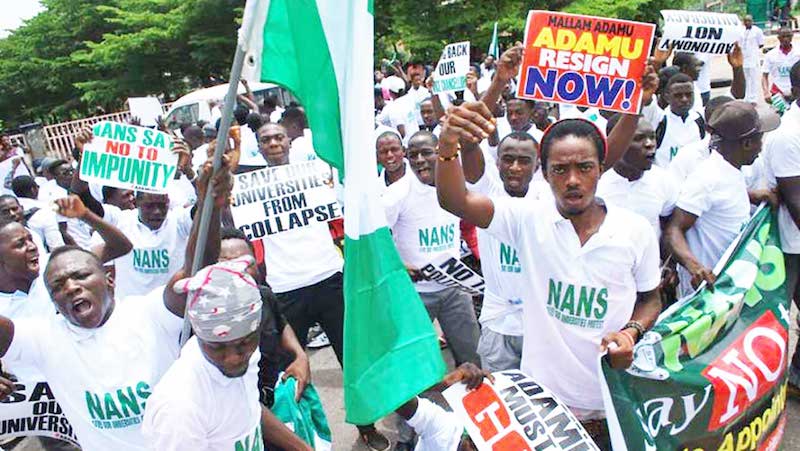 Apart from the heavy rain that brought along flooding and the attendant traffic gridlock, the #NANS Protest compounded the pain of commuters along the Apapa-Osodi-MMIA Airport Road in the city of Lagos on Monday.

Many who were scheduled to travel via the Muritala Muhammed International Airport (MMIA), Lagos, and its local wing in Ikeja on Monday morning through afternoon suffered what some of them tagged “double jeopardy.”

The protesters, under the umbrella of the National Association of Nigerian Students (NANS), blocked the road that leads to the international airport while those who wanted to access the local airport through the Mafoluku Road were also caught up by the traffic snarl.

Other road users, including students, workers, and particularly staffers of the airports, also suffered inconveniences as they struggled to get to their destinations. Many, including foreigners, had trekked long distances while touts who offered to carry their luggage charged exorbitant fares.

Meanwhile, while the police appealed to the protesting students to vacate the road, claiming it is an international route, the protesters remained adamant. They insisted that “even when we leave today, we will be back tomorrow again.”

Traumatic Experiences from the NANS Protest

Some of the travellers who spoke to NEWSMEN on Monday afternoon amidst the heavy rain said they trekked about four kilometres to access the airport.

“We paid as much as N20,000 to get my luggage to the airport because the touts who were available billed us exorbitant fares. It was a hellish experience,” one of the travellers, who does not want to be named, said.

Many commuters, including non-Nigerians, children and pregnant women, also walked long distances to the airport with some carrying their luggage on their heads.

One of the stranded commuters; a government employee by the name of Oyetunji Sunus, said he got stuck in the traffic as early as 8:30 am while on his way to work.

Mr Sanusi said: “I have suffered today. This is 2:30 and I am still here. The agitation is worth it but the hardship that it has caused is unimaginable. My appeal to the government is that they should find a lasting solution to this issue.

Meanwhile, a pensioner who is also ill, Felix Achonu, was unable to get to the hospital as he was also caught up in the traffic.

“I am on my way to the Federal Airport Authority of Nigeria (FAAN) hospital as a FAAN retiree but my car is parked at the back.

“Look at my body, it is a film of rash and has been hitching me for days. That’s why I have to see the doctor,” Mr Achonu said.

The 76-year-old man said he had been stranded in his car since morning but those other passers-by advised him to speak to the protesting students “it would allow me to move.”

An angry commuter, Francis Phillips, said he has been to 88 countries in the world but that Nigeria is the worst he ever lived. Speaking angrily, he said: “Even the spoon we use to eat here is substandard. I am stranded here and my wife is stranded at the local airport.

“Even in Somalia, it doesn’t happen like this. It is a shame.” He said the protest was justified but that the political office holders whom it is meant to affect “don’t care.” “They are busy sharing money because they don’t know their right from their left,” he said.

But while commuters were lamenting their ugly experiences, touts who had taken advantage of the traffic gridlock, expressed their joy over their gains.

They said travellers were forced to engage their services to carry their loads, and that the money they generated while the protest lasted was equivalent to what they might make in one week.

One of them, Kamoru Lawani, narrated how he had helped passengers carry their loads to the airport, and how in less than five hours he already made N45,000.

“I want the protest to continue; it should not end,” he said.

The Deputy Commissioner of Police in charge of the airport, Kayode Sunday, while addressing the protesting students, pleaded with them to either leave the scene or create a way for vehicles to pass.

He said: “We have been pleading with them and the command is making an effort. All the security agencies in Nigeria are working together to talk to them to sheathe their swords.

“Nobody is happy that they are at home for months, however, we want them to free the road. We are managing them and they are cooperating with us.”

He said the protest had been peaceful and that the security operatives on hand had ensured that it was not hijacked by hoodlums.

“The students have promised us that at 4p.m they would vacate the corridor. This is an international corridor and we need to secure the premises,” Mr Sunday said.

Speaking to PREMIUM TIMES on behalf of the protesters, the Chairman of NANS’ Ending ASUU Strike Taskforce; Ojo Raymond, said the students would continue to block major financial hubs in all parts of Lagos until the universities are reopened.

“It is ‘aluta continua’ for us until we achieve results. We are going to shut down the Nigeria Ports Authority tomorrow,” he said.

The former Vice President of NANS said the target of the body on Tuesday is the Third Mainland Bridge and NPA in Lagos.

“So, I have told the police that the barricade remains until we leave here today,” he said

Why Princess Anne’s Two Children Are not Prince and Princess

Tue Sep 20 , 2022
228 Princess Anne’s two children Peter Phillips and Zara Tindall were both in attendance at Queen Elizabeth II’s funeral on Monday 19 September. The two royals supported the rest of their high-profile family at the sombre occasion – but it left fans with questions regarding their titles. Peter and Zara do not have titles, and this is […]