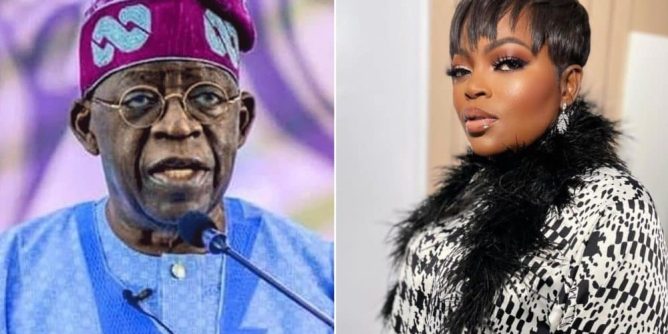 Asiwaju Bola Tinubu, the 2023 presidential candidate of the All Progressives Congress (APC) has advised supporters at the Lagos APC secretariat to ignore Funke Akindele and behave as if they do not even remember the name.

Tinubu made this known at a political outing on Wednesday, where his supporters sang a campaign song, describing Funke Akindele as a political ‘ant’ compared to the incumbent governor of Lagos and candidate of the APC in the 2023 election; Babajide Sanwo-Olu.

While responding to the campaign song, Tinubu cautioned his supporters against mentioning the name of the deputy governorship candidate of the PDP in the Lagos 2023 guber elections; Funke Akindele in his presence, describing it as disrespectful and an insult.

Speaking in the Yoruba language, Tinubu, who is backing incumbent Governor Babajide Sanwo-Olu of APC for re-election said: “Don’t even bother to mention her name in my presence. It is an insult. It is disrespectful.

“Don’t even behave as if you remember the name. It is a big insult, it is an abuse. A fowl wants to enter a house, it is bending down, how tall is it in the first place,” the former Lagos governor said.

Also present at the event were the incumbent Governor of Lagos State, Mr. Babajide Sanwo-Olu, and his deputy, Dr. Olufemi Hamzat who have Tinubu’s backing for re-election.

Fri Nov 4 , 2022
109 President Muhammadu Buhari has hailed the renowned businessman and philanthropist; Femi Otedola, on his 60th birthday, joining family, friends, and associates to celebrate the milestone. The president, in a statement by his media aide; Femi Adesina joined in the joyous occasion, giving thanks to the Almighty God, who has […]