A Statement By The Prominent Civil Rights Advocacy Group; Human Rights Writers Association of Nigeria (HURIWA) Condemning The Series of Attacks and Allegations Against the Honourable Attorney General of the Federation and Minister of Justice; Abubakar Malami Orchestrated by Elements that are well known to be Associated and/or are Working for alleged Affiliates of the Suspended Chairman of the Economic and Financial Crimes Commission; Ibrahim Magu.

Human Rights Writers Association of Nigeria (HURIWA) is a prominent civil rights advocacy group. It is a team of professionals who have come together to advance the single agenda of building a formidable and economically strong united Nigeria.

We need not overstate our strong track record within the Civil Society Community in Nigeria which spans nearly two decades of an unblemished record of patriotism.

It has come to our notice that the Attorney-General of the Federation (AGF) and the Minister of Justice; Abubakar Malami (SAN), who is the Chief Law Officer of the Federal Republic of Nigeria has been the subject of a vicious and sustained attacks in recent times.

The campaigns, which intensified since the AGF urged President Muhammadu Buhari to sack the suspended Chairman of the Economic and Financial Crimes Commission; Ibrahim Magu for alleged infractions is being executed by elements close to POWERFUL FORCES backing Ibrahim Magu and these groups hide under compromised Civil Society Organisations and induced media platforms to launch personal attacks against the Chief Law Officer of the Federation.

To achieve their nefarious objectives, they have twisted several allegations which range from mismanagement of funds, abuse of office to obstruction of criminal investigations just to distract and even disable the Chief Law Officer of the Federation and make a mess of the whole anti- corruption fight especially that involving Ibrahim Magu.

Why Abubakar Malami Deserves Our Support

The Attorney-General of the Federation and Minister of Justice, Abubakar Malami, SAN has been championing the duties specified in the office as his functions and powers. His contribution in the area of carrying out the assigned roles of his office is indelible.  Nigerians are not unaware of particularly the following:

1. AGF’s contribution in taking over the Sowore case that eventually saw to the release of hitherto detained Sowore and Dasuki.

2. Decongestion of Nigerian Correctional Centres and release of almost 7,000 inmates

10. Contribution in the signing of Executive Orders especially No 10 on Independence of State Legislature and Judiciary

11. Coming out with Post COVID-19 Justice Sector plan, among others.

We, the Human Rights Writers Association of Nigeria humbly state that we are not holding brief for the AGF; far from that. Our records are clear in issuing constructive criticisms to all office holders since the platform was set up about 14 years ago. But we are very concerned about the ongoing campaigns against the Attorney-General of the Federation and Minister of Justice; Abubakar Malami for the following reasons:

First, the efforts to distract and even disable the Chief Law Officer of the Federation at a time we are embarking on measures to strengthen our laws and institutions is not in the best interest of the nation. This is because the mandate as given to the Office of the Attorney-General in Section 174 (1) is critical to the fight against corruption, which is the cardinal focus of the current administration under the leadership of President Muhammadu Buhari.

We are not unmindful of the FUNDAMENTAL RIGHTS AND FREEDOMS PERMITTED BY THE CONSTITUTION INCLUDING RIGHT TO FREEDOM OF EXPRESSION. SO WE ARE NOT OPPOSED TO GROUPS EXPRESSING THEIR OPINION RIGHTLY BUT WE ARE ONLY WORRIED ABOUT THE MOTIVE.

Secondly, we all are aware  that Ibrahim Magu; a Nigerian Police Officer who served as acting chairman of the Economic and Financial Crimes Commission (EFCC) from 9 November 2015, until his suspension on 7 July 2020 is embattled with about 21 corruption allegations brought against him by the Attorney General of the Federation (AGF) and Minister of Justice; Abubakar Malami.

Thirdly and related to the above, we have credible intelligence that the people behind these attacks and compromised civil society groups are being sponsored by persons sympathetic to  Ibrahim Magu just to mess up the whole investigation on the EFCC, which involves Ibrahim Magu and to scuttle the whole essence of trying to reorganize the anti-graft Agency.

HURIWA FULLY ENDORSES THE COMPREHENSIVE OVERHAIL OF THE EFCC TO BRING IT IN LINE TO BEST GLOBAL PRACTICES AND TO COMPEL THE INSTITUTION TO BE LAW AND RIGHTS BASED DEVOID OF ARBITRARINESS AND TYRANNY OF A POWERFUL CHAIRMAN.

Fourthly, the Nigeria Incentive-Based Risk Sharing System for Agricultural Lending (NIRSAL) issue they are basing their allegation of obstruction of  corruption cases on, the AGF did not direct the stoppage of the investigation, but only directed for a well-coordinated investigation to be carried out by the Nigerian Police, which is the  body legally recognized and empowered under section 214 (1) and Section 29 of the Constitution of the Federal Republic of Nigeria (1999 as amended) and the Police Act, respectively.

The AGF’s letter dated February 4, 2020 as published by the online media is a clear and unambiguous directive that the other several agencies conducting parallel investigation on NIRSAL in respect of the same subject matter to stay action and allow the Nigeria Police Force to continue and conclude the investigations it had started in order to avoid multiplicity, confusion and wastage of scarce resources.

The above is not an offence and so it is totally incredible to us how these sponsored elements who are on a mission of personal vendetta for their pay-masters are bringing forth tainted, unwarranted and ethically challenged allegations against the AGF at a time the anti-corruption structures and system is being investigated and the Country is trying to reorganize what is left of the credibility of the EFCC.

The sponsors of this vicious campaign must not be allowed to achieve their evil plans of destabilizing measures to strengthen our laws and institutions, especially the Economic and Financial Crimes Commission. If we sit back and fold our arms whilst this vicious campaign against the AGF is allowed to aggravate, then we will be shooting ourselves in the foot and destroying whatever is left of the credibility of our institutions.

Recall that we had earlier stated our UNAMBIGUOUS AND ABSOLUTE SUPPORT FOR THE PRAGMATIC REFORMS OF THE EFCC SO A ROBUST, MUCH MORE COMPETENT AND A PROFESSIONALLY RESPECTED EXPERT CAN BE APPOINTED TO HEAD THE EFCC. THIS DESIRE IS THE FUNDAMENTAL REASON FOR OUR POSITION BEING CANVASSED.

Obviously, the intentions of the sponsors of these vicious campaigns of personal vendetta are not unselfish, not nationalistic and not patriotic, but ’a cash and carry’ kind of campaign, which in essence defeats its genuineness. This is because they are elements that are well known to be associated with POWERFUL FORCES BACKING Ibrahim Magu and have been working for him in the Civil Society Community. Mind you, we did not say that Ibrahim Magu is sponsoring these groups but hard core intelligence at our disposal points to persons who will benefit should the STATUS QUO BE MAINTAINED WITHIN THE EFCC.

These compromised civil society groups and their sponsors are just chasing shadows and trying to destabilize the ongoing probe and investigations involving a friend of their funders. If the President decides to take any independent action, so be it; but the essence of their vicious campaigns against Malami is pointless and defeated.

We urge the President; His Excellency, Muhammadu Buhari not be deceived by these vicious attacks on his Honourable Attorney General and Minister of Justice because those bringing up these allegations are working hard to scuttle the ongoing reformation in the EFCC.

Hon. Uju Kingsley And The Desire for Quality Legislation and Representation

Sat Aug 8 , 2020
400 By Kennedy Eberechi.   The Honourable Member representing the good people of Ohaji/Egbema, Oguta and Oru West Federal Constituency in the National Assembly; Hon. Uju Kingsley Chima has continued to implement his pledge of advancing the desire of the people for quality legislation and representation in a way that […] 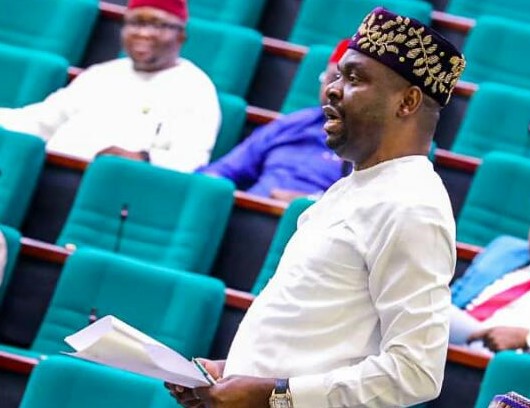