Undoubtedly, anyone from the Southeastern part of Nigeria will easily tell how economically viable the city of Aba is, which dates back to history. Ever before the establishment of a British military post there in 1901, Aba was a traditional market town for the Igbo race.

When the incumbent Governor Okezie Ikpeazu mounted the saddle of governance in the State in 2015, he quickly unveiled his roadmap for the state with special emphasis on industrialization and infrastructural revolution for the commercial town of Aba, the industrial capital and entrepreneur centre of Nigeria.

Despite these lofty promises by the current administration, there hasn’t been sufficient investment in the city necessitating concerns that Aba, which previously was the industrial and production centre for most of the locally manufactured goods in Nigeria and saw buyers from across West Africa trooping in mass to the City is gradually losing its economic attraction due to continuous neglect, poor management and lack of deliberate efforts towards infrastructural revolution.

In recognition of the above concerns, the prominent Civil Rights Advocacy Group; Human Rights Writers Association of Nigeria (HURIWA) has tasked the Abia State Governor; His Excellency Dr. Okezie Ikpeazu to be more pragmatic in acting on the issues bordering on the development of Aba as it will go a long way in justifying the confidence the people reposed in him based on his lofty promises to them.

HURIWA made this charge in letter to the Governor dated August 25th, 2020 wherein the Rights Group frowned at the fact that the state of infrastructure in Aba, the commercial city of Abia State and the industrial hub of the entire South East, which has been variously described as the ‘Japan of Africa’ is very poor despite the commercial activities in the City, which runs in billions of naira on daily basis,

Recalling that just as there are many small and medium enterprises and all kinds of engineering fabrications, almost all kinds of commodities, which include shoes, bags, leather wears, clothing, etc, are manufactured in Aba, the letter signed by the National Coordinator; Comrade Emmanuel Onwubiko, regretted that there are no good roads to transport these manufactured goods and other services adding that more troubling is that streets and roads in the city, which are in deplorable conditions, are pest-ridden with dirt, including artificial marshes and mountainous roadside refuse dumpsites.

“In contrast to what it used to be, almost everything in the city denies its commercial status as basic social and economic infrastructures are elusive. Apart from Faulks Road, newly fixed to link the Ariaria International Market, almost every important road to business and industrial centres in Aba are in awful situations.

“As a result, major industries are now disappearing from the industrial city and relocating to neighbouring states where there are better environments, security, people and business-oriented governments making people to wonder if Abia State has a government because everything is fast decaying”, HURIWA highlighted.

Continuing, HURIWA pointed out that Aba is gradually declining with huge amounts of waste dumped inside drainages and on walk-ways across “the hitherto prosperous city and no visible efforts at managing the growing tons of refuse on the streets of Aba. We are concerned that the situation is getting worse”.

Additionally, HURIWA expressed that the continuous neglect of roads and other infrastructures, which includes the daily dumping of refuse in the city centre and across business districts within Aba is a suggestion that there is need for infrastructural revolution in the City and government should take immediate action

While noting the possibility of infections from water, land and air pollution because people eat and drink in such environment, HURIWA told the Governor that from available facts if nothing is done and soon, infections of all kinds would be the order of the day, even as people there still pay sanitation fees to the state government, yet they cannot breathe in good air.

Moving forward, HURIWA recommended that Aba’s path to reclaiming its lost glory might be anchored on strengthening its infrastructures especially since the incumbent Governor is from Aba.

“Although, Dr. Okezie Ipkeazu has been boastful about wearing strictly made in Aba clothing since his assumption of office; a gesture geared towards promoting the ‘Made in Aba’ campaign, it’s not only about wearing items of clothing produced in Aba for all his local and international outings; Aba’s problems cannot be resolved without proactive infrastructural revolution”, HURIWA observed.

The rights group therefore advised Dr. Ikpeazu that he would become a phenomenon in Igbo history if he succeeds in turning around the state of infrastructural decay in Aba and build formidable social amenities in no time.

This is because, according to them, in a country that has achieved only modestly in the realms of science and innovation, the Aba economic and industrial power could play an outsized role in the building of national self-esteem and in the achievement of macroeconomic policies. 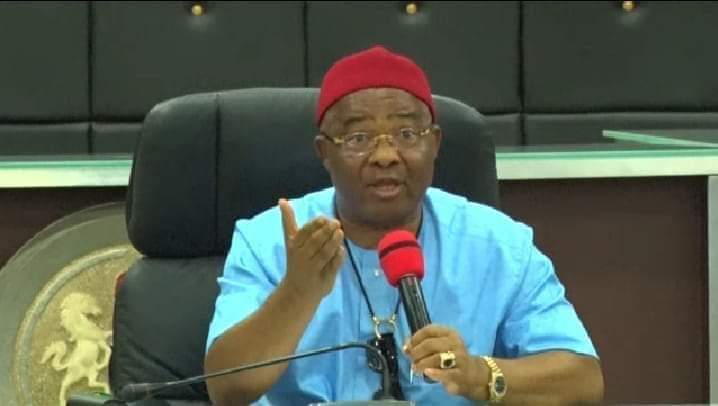